Sunday morning saw the predicted rain fall and fall and keep on fallin’, as did the attendance: if 5,000 people turned up on Sunday I’d be surprised. Thank heavens then for BLUES PILLS. Effervescent vocalist Elin Larsson was the very antidote to a wet and miserable day, and kept spirits up while the rest of the band showed just why they’ve come so far so fast. Blues Pills ooze class, and were the perfect act to get the party started once again. 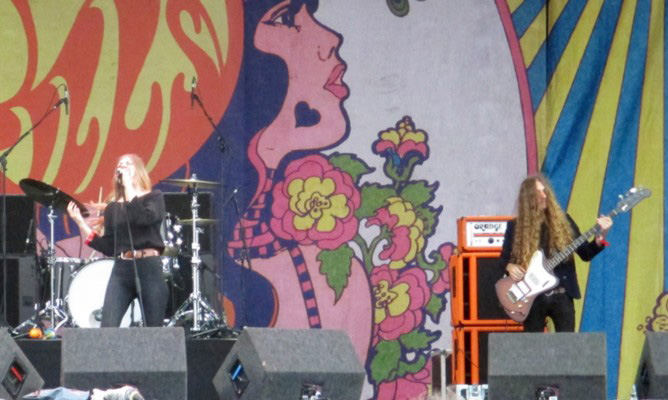 A change of gear on the Main Stage saw SÓLSTAFIR up next. Very much refusing to abide to any set convention the Icelandic quartet confronted the small but faithful crowd who braved the appalling rain with a short but powerful and extremely challenging set. “Like their home country, they’re out there and a bit bleak,” commented my partner-in-crime, which wasn’t a bad summary. The trick really was to see their set as a continuum rather than four individual songs, and allow it to build and build to a stunning climax. Those who just dropped by for a few minutes didn’t get it, but if you stayed the course it all made perfect sense. Stunning; literally stunning.

As far as I was concerned, that was it for the main stage, as Quireboys, Temperance Movement, Rival Sons, Seasick Steve and Greg Allman all hold no interest for me. Hey, it’s a personal choice. But one man’s turkey is another man’s Christmas dinner and they all went down well in front of the faithful. But as the previous day’s outlaw country tent was now given over to the blues there were several acts of interest to check out. 17-year-old Aaron Keylock is certainly a name to look out for, his fluid playing and easy demeanour marking him out as a future star. I didn’t think he had the songs yet – although my partner-in-crime disputed this – and the highlight for me was the cover of Johnny Winter’s ‘Ain’t That A Kindness’. Mick Ralphs’ outfit was enjoyable as a one-off, although to be fair there was nothing there a good pub band couldn’t pull off. ‘Good Loving Gone Bad’ and not unexpected closer ‘Can’t Get Enough’ showcased vocalist Adam Barron’s exceptionally strong voice, but it was ‘Shakey Ground’ – performed by The Temptations, Aerosmith, Don Henley and headliner Bernie Marsden – that stood apart from the crowd.

Back out in the fresh air The Pineapple Thief had left me colder than a cloudy day in Cardiff, but RIVERSIDE really hit the spot. Like Sólstafir before them they commented on how the weather made them feel at home, and like the Reykjavíkians they were challenging and focussed. To dismiss them as simply ‘prog’ – or calling them “Poland’s answer to Porcupine Tree” as the very poor official vent programme suggested – does the band a massive disservice; innovative and exciting, they trailed the way for a new wave of progressive metal bands and are still at the top of their game. AND in their set opener they had probably the proggiest title of the day. It was a shame that a few glitches delayed their entrance, and forced a five-minute warning from the stage manager and an abbreviated set. 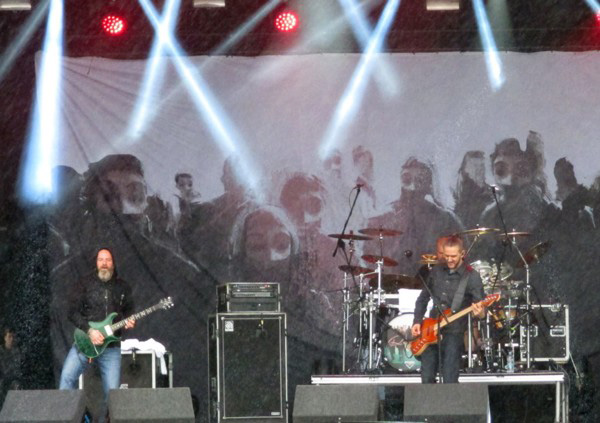 DANNY BRYANT was bluesing away back in the tent by the time the closing chords of the sublime ‘We Got Used To Us’ were fading away. Enthusiastic and exhilarating, Bryant gave it all he’d got with some classy work-outs, although from some quarters came the comment that there was “too much noodling and not enough songs.” I should have braved the weather to see Alceste on the Prog Stage, but by now the energy levels were flagging and given the influx of punters into the tent it seemed wise to stay put to see JOANNE SHAW TAYLOR. Seemingly endlessly on the road, the irrepressible Taylor just gets better and better, and happily showed – with consummate ease – why she is one of the best guitarists of her age. It’s arguable whether she still needs Frankie Miller’s ‘Jealousy’ still in her set when she has so many great songs of her own, but it put a slightly different slant on proceedings for four minutes or so.

BERNIE MARSDEN topped things off in the tent, and although it could be argued that he’s done little over the past three decades to warrant such a billing it was an inspired choice by the organisers. Marsden went down a storm, beloved by the crowd and fronting a flawless band which also one Neil Murray on bass. He’s unlikely to sell many copies of the recent album ‘Shine’ by only playing one track from it, but the set of old classics, old solo numbers (nice to hear ‘Who’s Foolin’ Who?’ from 1981’s ‘Look At Me Now’) and old Whitesnake-era songs went down a storm with the fans who’d wedged themselves into the tent. (On a personal note I do wish he’s play ‘Here I Go Again’ straight though, rather than bending towards the awful US remake which, of course, has nothing to do with him.) And he got an encore too, pulling out of the hat the Lane/Rogers evergreen ‘Walking By Myself’ which apparently Gary Moore played at the Marsdens’ wedding 30-odd years ago. Ahhh…

After that, the rest of the evening petered out as far as I was concerned. Unable to get into the rambling southern country rock of GREG ALLMAN (it’s no surprise that it’s one of the Allman Brothers’ song titles that gave this event its name) I wandered off to the Prog Stage and found MARILLION equally inaccessible. It can’t have been just me, though. This gig needed decent headliners (as well as a stronger bill and more metal bands) and, judging by the small crowds in front of each stage, neither band here had that kind of kudos: I’d be very surprised if either Allman or Marillion had more than 1,000 people watching them, and so, as so many others seemed to have already done, I rambled off back to the car.