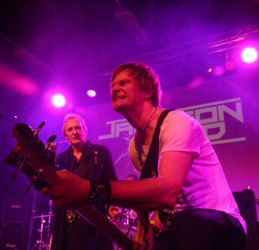 With the young and newish London band SEVEN SISTERS opening day three with a NWOBHM power chord, and rising stars AMULET following on in a similar traditional British metal fashion the event really needed something different from heads-down riffing, and something different came in the form of Scotland’s CHASAR. With Moog pedals and elaborate musicianship Chasar repositioned things more to the progressive metal end of the spectrum, and seemed to have a lot of fun doing it too. Metal Mirror had to pull out at the eleventh hour due to Cameron Vegas breaking three ribs so TYTAN admirably filled the gap in the running order, and hearing songs like ‘The Watcher’, ‘Women On The Frontline’ and of course ‘Blind Men And Fools’ after all these years was a total joy.

Excitement was running high now. BLACK ROSE – featuring Kenny Nicholson again; that’s four sets at Brofest now in three years! – are always, always good value for money. They’re tight, exciting, and have some great songs – ‘Biker’, ‘No Point Runnin’’, ‘Boys Will Be Boys’, ‘Nightmare’… The list is endless, and their set was built on classic upon classic. Steve Bardsley still has one of the greatest voices in metal, and combined with the rock-tight rhythm section of Kiko Rivers and Chris Bennet and that man Nicholson playing guitar like a man possessed Black Rose are a force to be reckoned with. Unfortunately the lead guitarist took his Blackmore-isms a little too far this time, and in trying to recreate the Man In Black’s ‘California Jam’ camera-wrecking exploits he slipped and trashed the filter that protects my lens. Ah well, he was mortified afterwards, and I do hope the other photographers got a good shot of it.

Flying the flag for Welsh metal – rather literally, given the two Red Dragons that adorned the stage – were Barry’s STORMQUEEN. After thirty years of inactivity Stormqueen reformed last year, and it was a nice touch that both vocalists in the band’s history – Chris Glynn-Jones and Paul Burnett – got to share the stage on this historic occasion. Stormqueen were the real curiosity of the day in that not many people knew of them but everyone had high hopes for them, and boy, did they deliver. With the opening sirens of 'Battle Of Britain' they were off like greyhounds, and were visibly enjoying every minute of their stage time. In fact they were having so much fun that they were the only band of the weekend to seriously over-run their allotted time, but with set closer ‘Raising The Roof’ doing just that no-one seemed to care. After that, the Eighties’ Euro-metal of Denmark’s WITCH CROSS seemed a bit of a let-down. Personally, it sounded like their material hadn’t aged gracefully, and the crowd thinned perceptibly as their set progressed, but they still had their hardcore support and played their hearts out, and that’s what counts.

TYRANT swaggered beautifully onto the stage and hit Brofest 3 with a set of prime-time NWOBHM numbers although threw in a swerveball with a no-nonsense cover of Accept’s ‘Son Of A Bitch’, vocalist Mark Kelser pointing out that he’d once been a member of that band “for about two weeks”. Heavy but also very memorable, Tyrant were another of the event’s highlights, and may well find themselves headlining one day. But this time around it was up to JAMESON RAID to wrap things up. Jameson Raid are an evolutionary band, and I don’t think some of my colleagues ‘got’ their blend of traditional NWOBHM and contemporary metal music. Led by the enigmatic but always engaging Terry Dark, ably supported by bassist Pete Green from the band’s second classic Eighties line-up and new blood Dave Rothan and Lars Wickett, Jameson Raid create music that is both passionate and deep, as ably illustrated by openers ‘Mr Sunset’ and ‘9 Reasons’, both from their new ‘Uninvited Guests’ album. ‘Titanic’ led the charge of older material, and of course things came to a close with ‘7 Days Of Splendour’. Things don’t get much better than this.