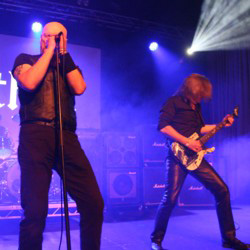 For the fifth annual Brofest the format reverted to that of the original 2013 festival with one full day’s entertainment on the Saturday preceded by an evening’s worth of bands on the Friday night. In addition, a pre-show on the Thursday at Trillions played host to three further acts: MIDNIGHT FORCE were young, solid and dependable whereas BADGE and SALEM – both of whom played that first Brofest – are seasoned pros, and took the audience by the scruff of its neck and gave it a damn good shaking. Not a bad start to proceedings…

So it fell to TOLEDO STEEL to open the event proper. Drummer Matt Dobson had suggested that the crowd would “see a marked improvement” in the band that had performed at Brofest in 2014 – not that they were slouches back then – but it’s true that the current line-up has more grit and determination than its predecessors. This is an up-and-coming band that should be playing to packed houses everywhere, and are to be missed at your peril. A cracking version of Grim Reaper’s ‘See You In Hell’ came towards the end of the eight-song set, but with songs as strong as ‘Children Of The Sun’ and ‘Speed Killer’ the Steely Boys need only play covers for fun or tribute. BERLYN moved things into boogie-stomp territory, especially evident in ‘Gonna Be Somebody’. The song that most people seemed to remember though was hard-as-nails closer ‘Maniac’. MYTHRA have a new album (‘Still Burning’) due imminently on High Roller, and weren’t afraid to lob the title track and ‘A Call To All’ into their set, to great applause. But the ‘Death And Destiny’ EP will always be their call to arms, and closing with a double-whammy of ‘Overlord’ and ‘Death And Destiny’ itself was the ultimate crowd pleaser. BATTLEAXE are consummate professionals, although with their drummer about to become a dad Avenger’s Gary Young stepped into the breech at very short notice and did an admirable job of keeping things neat ‘n’ tidy at the back. They have a clutch of highly memorable metal anthems at their disposal and wheeled them out one after another, with vocalist Dave King prowling the stage and guitarist Mick Percy making things look oh-so-easy. The final four songs were ‘Ready To Deliver’, ‘Power From The Universe’, ‘Chopper Attack’ and ‘Burn This Town’ – bang-bang-bang-bang : what more could you wish for? I’d expected OLIVER DAWSON SAXON to have played a couple of originals, but instead they blasted through ten older Saxon nuggets, kicking things off with the cruising ‘Rock & Roll Gypsy’ and then romping through the likes of ‘Princess Of The Night’, ‘Hungry Years’ and, inevitably, ‘Wheels Of Steel’. OK, so guitarist Gavin Coulson didn’t quite nail the solo in ‘Crusader’, but Seventh Son’s Brian Shaughnessy is an excellent frontman and Graham Oliver and Steve Dawson – whose birthday it was that night – remain at the top of their game. All-in-all, a great night’s entertainment. 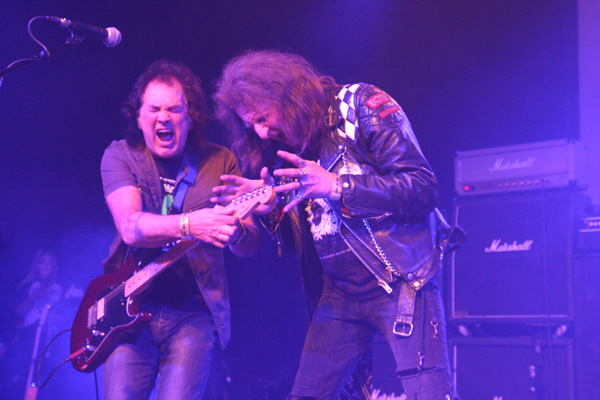 Saturday’s opener’s STARBORN came across as a tad overawed by events and I’m sure the youngsters (relative to the rest of the bands at Brofest!) have done better gigs. Describing themselves as power metal, but more in the US style than the European, the band showcased their rather tasty ‘The Dreaming City’ EP, and drummer Natalie Gaines became only the second woman to grace the Brofest stage. BLACKMAYNE followed, but again didn’t really lift things out of the ordinary, although a cover of Saxon’s ‘Redline’ and the Maidenesque closer ‘Chosen Few’ did hit the spot. Not so sure about the cover of ‘Whiskey In The Jar’ though… Bristol’s STORMTROOPER were the band of the day. They’ll hate the Rush comparisons but with lengthy songs, Colin Bond’s lead bass and Moog pedals, and intricate arrangements it’s the obvious point of reference. Drum problems after opener ‘Bounty Hunter’ knocked their momentum, but once up and running there was no stopping them. Both sides of the ‘Pride Before A Fall’ 7” got an airing, and the single-that-should-have-been ‘In The State In The City’ wrapped things up. Hopefully on the strength of this reformation appearance the band will do more live work, as they were simply majestic. 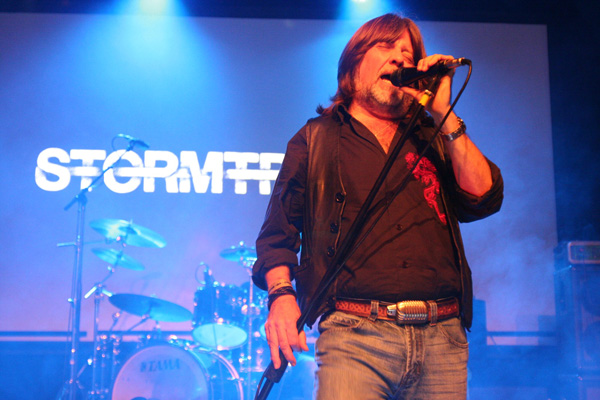 TRAITOR’S GATE were also hotly tipped and delivered in style, with both ‘Shoot To Kill’ and ‘Devil Takes The High Road’ from their sole 1984 EP making an appearance in their set. Unfortunately, they were the one band I saw very little of, for which I must apologise as I would have liked to have seen much, much more. SARACEN followed, and like Stormtrooper before them, had the crowd in the palms of their hands. Saracen’s appeal is that their songs are seemingly timeless, and the likes of ‘Heroes, Saints & Fools’ and ‘We Have Arrived’ sound as fresh now as they did back in the day. A shedload of issues have kept Saracen off the road for six or so years, but with performances as strong as this it would be criminal if they didn’t get out and tour once more. DEMON have been pretty consistently making albums over the years, and were probably the people’s favourite on the night, despite (or maybe because of) this being their first ever gig in Newcastle. ‘Night Of The Demon’ (naturally) opened proceedings and then came a ‘greatest hits’ set, wrapped up by a singalong ‘One Helluva Night’ and ‘Don’t Break The Circle’.HIGH SPIRITS were making their third trip to Brofest, but their first with mainman Chris Black relinquishing guitar duties altogether to concentrate on vocals. Ultimate crowd-pleasers, he and his crew can do little wrong in front of the Brofest faithful. GHOUL, on the other hand, were hugely marmite. If you want to see four guys wearing bloodied sack masks making a racket and butchering every character who appeared on stage, then this is the band for you. Post-ironic metal, you could call it. Or, perhaps, rubbish. Once the fake blood had been cleared up TOKYO BLADE took the stage to bring things to a metallic conclusion. With original singer Alan Marsh front ‘n’ centre once more the band concentrated on their early days, opening with B-side ‘Death On Main Street’ and encoring (inevitably) with ‘If Heaven Is Hell’. Andy Boulton and John Wiggins make one of the finest pairings of guitarists in metal, and with Andy Wrighton on bass and Steve Pierce on drums it was like being whipped back to the early Eighties all over again. Bliss… 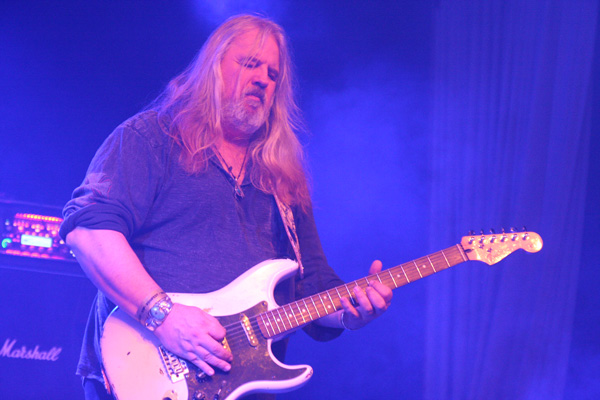