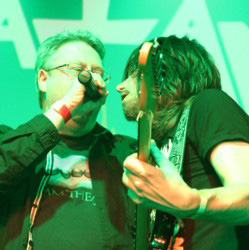 To get people back in the mood, Saturday kicked off with the RODNEY SHADES BAND, an effervescent four-piece who put the party in party. Hugely entertaining, they only had five songs and hadn’t played live before, so this was a bit of a trial by fire. Still, they did what they set out to do, closing with an ambitious cover of Judas Priest’s ‘Starbreaker’ which you wouldn’t naturally expect from four youngsters wearing sunglasses and grins so wide their heads almost fell off. I’m guessing if you walked in halfway through you’d have thought ‘WTF?’ but they certainly put a smile on the faces of those that braved the midday kick-off.

BLIND HAZE were Motörhead through and through – weren’t parts of ‘No Sleep ’Til Hammersmith’ recorded at Leeds, their home town? – with Conan’s growling Rickenbacker bass, growling vocals and growling mutton-chop sideburns. There wasn’t a great deal of subtlety going on, but they embraced the challenge and engaged the punters and went off with a job well done.

HESSIAN might come from Portland, Maine, but still squeezed in a number (‘Evil Witchman’) by the ’N Betweens who would later become Slade. Difficult to categorise, Hessian took in territory occupied by the likes of Sabbath, BÖC and Hawkwind, mixed it all down and served it up in a trippy and exciting kind of way. The interplay between dual vocalists/guitarists Salli Watson and Angus McFarland also gave them an edge, but where on earth McFarland got those trousers from is anyone’s guess… 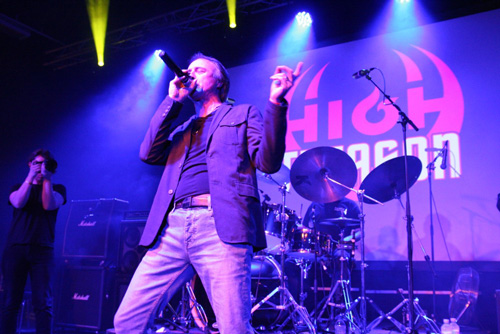 HIGH TREASON were therefore the first NWOBHM band of the day. Their approach – intentional, according to vocalist Peter Yeomans, to stand out from the crowd – was more rock than metal, more accessible than in-your-face, and it paid off handsomely. More fun than a bouncy castle, High Treason were easily the first major success of the day, opener ‘Big Dog’ being more bark than bite, and set closer ‘Saturday Night Special’, a re-working of their 1980 single, a glorious slice of pop rock. Top marks to ‘Things We Did To Schools Out’ too.

CYNIC by comparison were much more introspective, treating the audience to a clinical and rather cold but extremely well executed set. After the more engaging High Treason, people didn’t seem to care much for precision and structure, and the crowd thinned somewhat. A shame, because they missed some great music from a great band, who wrapped things up with a romp through ‘Louie Louie’ in tribute to Lemmy.

“This could be great, or a complete disaster,” commented one of my colleagues as ROBESPIERRE took to the stage. The corpse-painted quartet only recorded a bunch of demos in the early Eighties, and this was their first ever gig. And they were great. From titles like ‘I Am A Cannibal’ and ‘Die You Heathen’ you might think they come from the Dark Side, but in fact they were straight down the line metal. Despite the image they didn’t take themselves too seriously, they played a blinder, and you have to admit that “we are evil, we are monsters, we are men of violence” makes for a very catchy chorus.

I last saw GEDDES AXE 35 years ago, back when we were all young, but it only took a few moments of opener ‘Return Of The Gods’ to remember why this band were so revered back in the Glory Days. Tight and exciting, the nine-song set raced through a lot of familiar friends – ‘Sharpen Your Wits’, ‘Escape From New York’ and ‘Six-Six-Six’ to name but three, and it’s little wonder the new vinyl round-up on High Roller records was hugely sought-after at the merch stands. Sharp as the axe of their name and very enjoyable, they should have been the ideal warm-up to the night’s headliners, but reformed German thrash band DESASTER had that honour. They went down better than I’d expected, but they weren’t my particular cuppa, and like many I retreated to catch my breath before the star attraction. 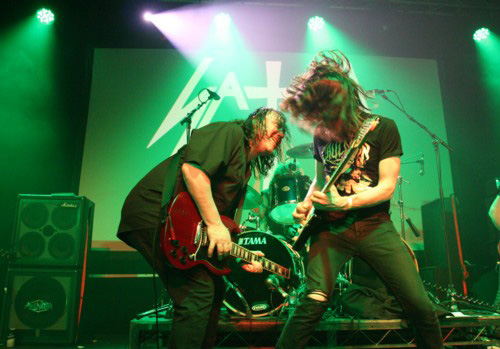 SATAN haven’t played their home town in thirty years. Russ Tippins once said he hated it, playing to thirty people, twenty of whom were in other bands and were just taking the piss. What a difference thirty years makes: tonight they were greeted as homecoming heroes, and could do no wrong. Opener ‘Trial By Fire’ is still one of the greatest songs ever written, full stop, and although they could easily just have played 'Court In The Act' they covered all three albums recorded by the Ross / Tippins / Ramsey / English / Taylor line-up. Steve Ramsey ran around like a loon, Graeme ‘Bean’ English span on the spot like a four-year-old, and Tippins and Sean Taylor made it all look so, so easy. And in fronting the band Brian Ross took joint honours with Kenny Nicholson for playing four sets at Brofest in three years. Original singer Trevor Robinson replaced Ross at the mikestand for ‘Oppression’ and at the end of the night original drummer Andy Reed replaced Taylor for ‘Kiss Of Death’. They should all have taken a bow, all seven of them, just to round things off, but that’s a minor quibble. The best band of the weekend, no doubt about it.