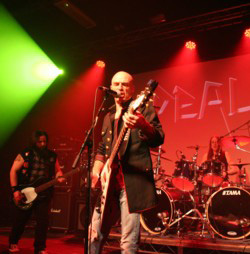 If Saturday started with a party, Sunday kicked off with a bang, as the reformed SATAN’S EMPIRE took Brofest by the scruff of its neck and gave it a damn good shaking. Big and brash, the attention-grabbing five-piece made jaws drop, and you can only really wonder why so little has been written about a band this good for so long. OK, so Satan’s Empire are only known for one song, but what a song. ‘Soldiers Of War’ is one of the NWOBHM’s finest, but the band’s forty minutes showed it was not a fluke. Other material in the set also boasted the time-changes and overt complexity which makes ‘Soldiers Of War’ so engaging and so damn exciting, and the thought that the band are back in business once more could be the best news you’re likely to hear in 2016. 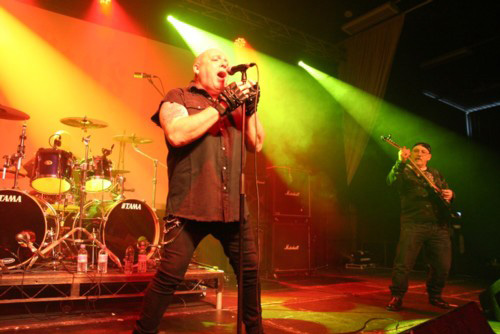 I remember SIEGE being championed by Paul Miller when I used to write for his ‘Forearm Smash’ fanzine many, many years ago, although back then they were a quartet fronted by Sharon Thompson. With her death from cancer in 2010 Siege now operate as a three-piece with bassist Dave Glover handling the vocals, and theirs was a polished and exciting set, not sounding a million miles from the likes of Shiva – progressive but extremely accessible. To my mind though there was a gap, both physically and metaphorically, where Thompson once stood, and I couldn’t help feeling how better the visual dynamic would be if they recruited a new singer, however painful that might be for Glover, guitarist Al Stringer and drummer Ray Lawrence to contemplate.

For some reason OMEN SEARCHER just didn’t seem to click with the crowd. Their set was cut from a lighter cloth, true, and veered from extremely melodic to almost power-pop at times, but it was well delivered and came straight from the heart. Interest seemed to dwindle though and despite the set ending inevitably with their 1982 single ‘Too Much’ only thirty or so people were present by this time to witness it. OXYM had no such trouble though. Trotting out both sides of their 1980 single (‘Music Power’ c/w ‘Mind Key’) and closing with the ‘New Electric Warriors’ cut ‘Hot Rain’ (dedicated to original singer and guitarist Rob Rigby, who’s also no longer with us) was the obvious way to keep people on their toes, and the fact that their new album ‘Passing Thorough Gateways’ is getting some great reviews was also a reason to follow proceedings to the very end.

In his ‘NWOBHM Encyclopedia’ Malc Macmillan reckoned that MILLENNIUM’s material was a “bit too samey and readily interchangeable,” which wasn’t really borne out by their performance on the day. OK, their set probably broke no new ground, but the band were steadfast and uncompromising, and their forty minutes seemed to race by. It's no surprise that the bulk of their set came from their 1984 self-titled album, although it was the non-LP ‘Caught In A Warzone’ that stuck in my mind.

There must have been something in the water in Barnsley fifty or so years back as SEVENTH SON were infused with the spirit of Saxon and their frontman, the fetching and hyperactive Brian Shaughnessy, sounded so Biff, right down to the corny but funny one-liners, that he could be the Saxon vocalist’s clone. Trying to describe Seventh Son is like trying to describe a formula one car as it shoots past, but suffice to say they’re highly talented and absolutely on-the-money when it came to entertaining. It was a great performance by a great band who’ve written some great songs, and although ‘Factory Girls’ isn’t the best record ever put out, played live it’s a cracker. 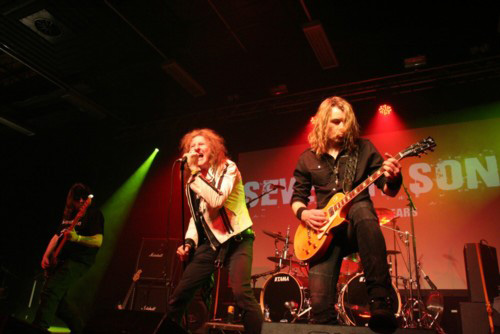 To celebrate its thirtieth birthday DEALER played their ‘First Strike’ album in its entirety, although as it clocks in at longer than the prescribed forty-minute set one track was sacrificed (but from my notes I can’t see which one: sorry!). Like Shaughnessy before him, potty-mouthed guitarist/vocalist Trev Short has a larger-than-life personality and knows how to command a crowd, and combine that with a set executed with total precision and you can see why for some neutrals Dealer delivered the set of the day. They were, it has to be said, absolutely stunning.

WEAPON UK – or Weapon as many fans insist on calling them in defiance of a ludicrous spat over the rights to the name – are consummate professionals. They know what they have to do and how they have to do it, and if they are a little ‘cold’ at times you cannot doubt their professionalism and expertise when it comes to writing and delivering a catchy song. A slight hitch meant that Tytan’s Kevin Riddles covered the bass duties, but that didn’t seem to cause any worries in the slightest. Their forty-minutes naturally showcased their 2014 ‘Rising From The Ashes’ album but they were still savvy enough to wrap things up with ‘Set The Stage Alight’ and ‘It’s A Mad Mad World’ from 1980. Naturally. As for the headline act, MARTIN TURNER seemed a strange choice to close things, given that the music of Wishbone Ash doesn’t really fit with the weekend’s twenty previous bands (although of course their ‘Raw To The Bone’ LP was released on Neat). As such, numbers were certainly down by the end, but there was still a relatively healthy turn-out to see the likes of ‘Blowin’ Free’ and ‘Blind Eye’ alongside some of Turner’s own material.

Till next year then, eh?

Incidentally, having sold Siege’s merch as a favour I’ve got some copies of their ‘Razor Wing Reloaded’ CD in my possession which features amongst other cuts both sides of their original 1984 single ‘Goddess Of Fire’. Contact me if you’d like to buy one.