As if to celebrate the return of Brofest, back for its sixth outing after a two-year lay-off, the festivities started earlier than usual this time around with the launch of the ‘Heavier! Faster! Louder!’ podcast series on Thursday evening. The brainchild of the Discovery Museum’s digital producer Sarah Younas, aided and abetted by yours truly, the series charts the story of metal on Tyne & Wear and is available on all good podcast platforms. The launch event itself featured a Q&A session with Neat musicians Abaddon, Ged Wolf, Bernadette Mooney, Robb Weir and Harry Hill MC’d by me in front of an audience of two hundred. There’s a good review on rushonrock:

Straight after that it was up to Trillions for the pre-show party, opened by BLIND HAZE, followed by a cracking set by loveable Belfast rogues STORMZONE and headliners WITCHFYNDE, with Montalo and Luther Beltz joined by members of Overdrive.

With Brofest moving from Northumbria University to Newcastle Uni just down the road, at 6pm on Friday it fell to the UK’s RISEN PROPHECY to open proceedings at the festival’s new home. Trekking up the road from Sunderland, the young four-piece came across as a modern-day Onslaught with helium-fuelled vocals and a crushing guitar sound. Canada’s hyperactive RIOT CITY followed. Playing their first gig outside of their homeland, they were cool and confident, and turned in the first cover of the event with a hard-as-nails-take on ‘The Sentinel’.

Keeping on that side of the Atlantic, the tight and energetic HAUNT upped the velocity even further; finely tuned by coming to Brofest near the end of a hugely-successful European tour, Trevor Church’s band featured dual guitar licks, a take-no-prisoners attitude and a guitarist called John Tucker. There’s a lot of us around... Incidentally, am I the only person in the world not to know that Trevor is the son of Bill Church, “the Electric Church,” from Montrose and Sammy Hagar’s band? No wonder metal flows through his veins... Again from Canada came TRAVELER, whose frontman J.P. Abboud had guested with his countrymen on their Judas Priest cover earlier in the evening. Another great band, energetic, hyperactive, cool... Hmm... The only problem by now was pacing. Four great bands, all of whom worked their socks off, but all of whom pretty much approached things from the same direction, and as a result everything was in danger of blurring into one. 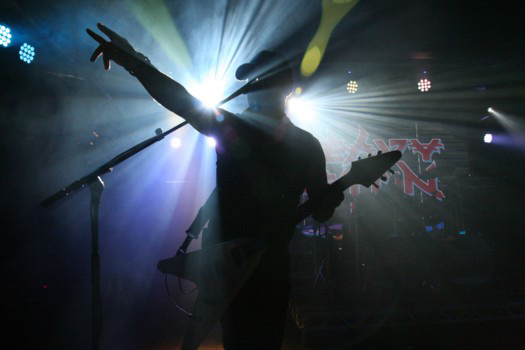 The remedy was HEAVY PETTIN, a band with the songs – c’mon, you know them: ‘Love X Love’, ‘Shout It Out’, ‘Roll The Dice’, ‘Hell Is Beautiful’ – the chops and that voice. Time hasn’t dimmed Hamie Hayman’s vocal cords, nor Gordon Bonnar’s fluid playing. It’s really good to have them back once more.

To kick things off on Saturday at the unearthly hour of midday, local lads SKYRYDER tumbled out of bed, pulled on the most lurid outfits they could find and delivered a set from the top drawer. Despite the early hour, their modest audience swelled considerably as people rushed in to see what the fuss was about, and by the end – rounding things off with a romp through ‘Angel Witch’ – they had pretty much everyone eating out of the palms of their hands. HEAVY SENTENCE, whose guitarist Mike Woods took his own life and inspired the Brofest clan to sell a charity event programme to make money for suicide-prevention, have moved on from tragedy and hammered through their forty minutes with a cracking version of ‘Medusa’ taking centre stage. 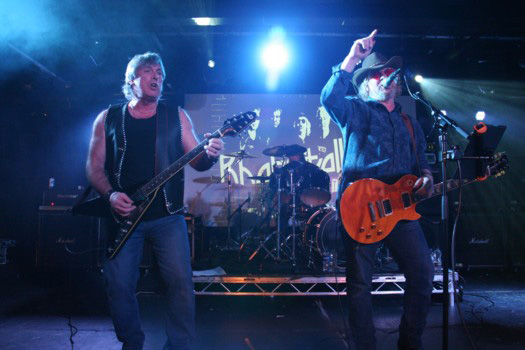 If I have to pick a band of the festival it would be RHABSTALLION, a band with enthusiasm and talent in bucketloads. There was something about their assured performance which indicated that this was a band to be noticed, and an airing of their debut single ‘Day To Day’ was a joy to hear. Rhabstallion are working on an album, which will be well worth watching out for. “We’re MEDUSA TOUCH, from 1982,” announced guitarist/frontman Gordon ‘Gogsy’ Sinclair. The band recently issued their old material on ‘Terror Eyes’, an album on ONR, and their set showed why there’s such an interested in the band. ‘Lively as a well-shaken bottle of coke,’ I scribbled at the time, as the effervescent quartet bounced around like a bunch half their age. 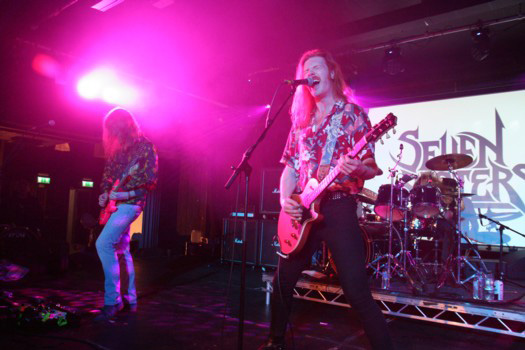 “I don’t remember SEVEN SISTERS dressing like that before,” remarked one punter as the Londoners took to the stage. Indeed, the Hawaiian shirts of Kyle McNeill and Graeme Farmer took some adjusting to under the stage lights, but the Brofest returnees have much more experience under their belts now than when they played back in 2015 including the current jaunt with Haunt. They also have a highly regarded album ‘The Cauldron And The Cross’ in their arsenal too, and it was the sprawling title track that was the centrepiece of their excellent performance. Beaming down from 1980, SACRED ALIEN have also recently rounded up their old material on an album ‘Legends’ on Skol Records. Perhaps sniffily dismissed as glam back in the day, Sacred Alien are theatrical and image-conscious, projecting their other-worldly approach not least via frontman Sean Canning’s third eye and, for the final song ‘Energy’, laser gloves. Hell, even their onstage setlist ended “mission complete – return to mothership”. Featuring three-quarters of the original line-up, Sacred Alien were another of the day’s big hits, and hopefully are back for the long haul: metal needs bands like this. With members of OVERDRIVE now back in the day job, following their work with Witchfynde at the pre-show party, it was back to business as usual for the Grantham band. Dogged by a poor guitar sound to start with, they battled through and went on to pull off a set with no excess baggage, just hard-and-fast metal. Old favourites like ‘Stonehenge’ and ‘Nuclear Bomb’ rubbed shoulder with newer cuts, and ‘Transfixed’, a song from their upcoming album, sounded particularly interesting. 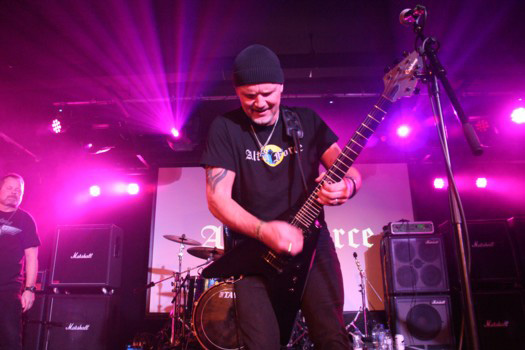 Despite forming back in 1984 Denmark’s ALIEN FORCE had never been to the UK before tonight –“we’re nervous to be here – it’s our first time in England,” said frontman Peter Svale Andersen – but the quartet looked extremely pleased to have finally made it over here. With two excellent Eighties’ albums to draw from (‘Hell And High Water’ and ‘Pleasure And Pain’) and a new single ‘Rebellions’ to shout about the Danes – and in particular guitar hero Henrik Rasmussen – were another of the day’s highlights. 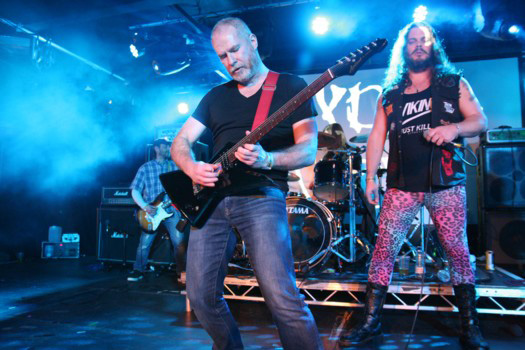 Brighton thrash band HYDRA VEIN promised a one-off reformation, which is a shame as they had the songs – check out the opening pairing of ‘Rabid’ and ‘Guillotine’ – although maybe not the dress sense (what was frontman James Manley-Bird thinking?) to make this a long-term venture.

Forty-plus years and still going strong, SARACEN are always a delight to watch, and maybe on their next visit to Brofest (should such a time come) they’ll take their rightful place as headliners. With stand-in bassist Tom Yates (son of their original four-stringer Barry) making his live debut the band stuck closely to their early days, courting cuts from their debut ‘Heroes, Saints And Fools’ and adding ‘We Have Arrived’ and ‘Face In The Crowd’ from their Neat Records 45. 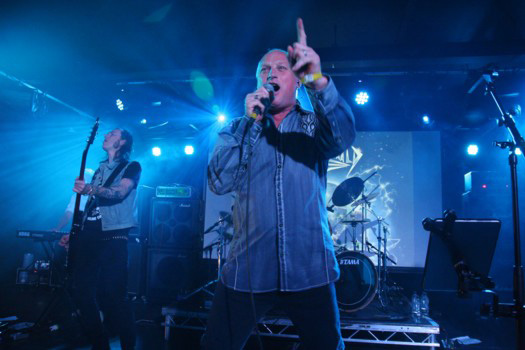 Headliners STORMCHILD only recently reformed, with Brofest being their first gig in thirty-six years. “Nervous, excited, and totally ready to rock the shit out of Brofest,” was how drummer Chris Mitchell described the band in our interview for the event programme, and that’s pretty much exactly what we got on the night. The band were supposed to have recorded an album with Chris Tsangarides back in the day and, although that didn’t happen, they did work with him on their 2018 release ‘Lightning Never Strikes Twice’, although he’d passed away before it made it to the shops: as such, the song ‘Dreamer’ from it was dedicated to his memory. A nice touch from an exciting band. Same time next year, everyone?