A review of Ramblin’ Man –the UK’s newest summer rock attraction – in the local newspaper a day or so after the event commented on how easy to get to the festival was: which is fine for those living in Kent or London. But siting a gig in one of the UK’s corners does tend to isolate it from the rest of the country and for the rest of us actually getting there was a complete nightmare on what the worst day of the year, weather-wise. And rather than discussions about the interesting, although not particularly exciting, bill dominating conversations on a bright and cheery Saturday, the biggest topic of conversation was Sunday’s atrocious weather forecast, seemingly monitored by a sea of smartphones.

First impressions spoke volumes. Scorpions and Greg Allman were never likely to sell the gig out and indeed that proved to be the case: the ceiling was 20,000 but I’m guessing only about half of that turned up on the first day, giving the place the feeling of a stroll across the common rather than the home of a festival. The three-stage set-up featured the Main Stage, the much smaller Prog Stage and a tent, which on Saturday was given over to outlaw country acts (so a sign could have been hung up saying ‘oi, John, you’ll hate this!’); and the running times across the three stages clashed continually and annoyingly, so there’s no way the average fan could see everything. That aside, it all went pretty smoothly at and 1pm NO HOT ASHES opened the Main Stage and JD & The Straight Shot kicked things of in the outlaw country tent. I must have missed out on No Hot Ashes first time around as they apparently signed to GWR Records in the mid-Eighties, but despite serving up some very pleasant although not overly memorable AOR (although closer ‘Johnny Redhead’ had a bit of life in it) and the fact that drummer Steve Strange is well-known in The Business, there was nothing to write home about. So it was straight down to the Prog Stage for UNTO US, an affable five-piece with no great onstage persona but oodles of talent and some very likeable songs. They only actually played three numbers; “the strange thing is that we’ve only got two more songs to play for you,” announced vocalist Huw Lloyd-Jones at the end of their opener, “but being a prog band they do go on for some time!” Well worth catching if you get the chance.

Following them on the Prog Stage was the first must-see band of the weekend, TOUCHSTONE, who didn’t disappoint one jot. Despite this being one of the band’s last gigs in its current format – vocalist Kim Seviour soon to retire because of ill-health – they played a storming, career-spanning five-song set which finally shook the festival-goers into some degree of action and culminated in a special guest appearance by John Mitchel on a bouncy cover of Tears For Fears’ ‘Mad World’. They should have had a longer set and been much higher up the bill, in my opinion, but I am assured by someone in the know that despite being put on hold once Seviour’s farewell gigs are completed later in the year, Touchstone will be back one day in some shape of form; with four great albums under their belts they’re far too good a band to call it a day now.

With FM doing whatever it is FM do on the Main Stage, MESSENGER were next up on the Prog Stage, taking things down a bit from Touchstone’s energy, although there was little doubting the quintet’s enthusiasm. The main draw now though was on the Main Stage, where BLUE ÖYSTER CULT proved that there’s still unfinished business in their soft white 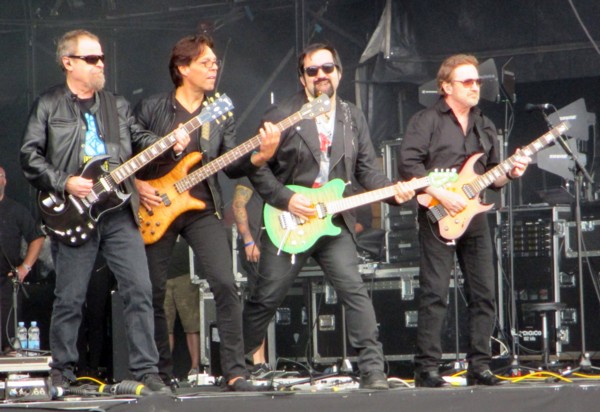 underbelly. Theirs was very much a greatest hits trip from way back when (the newbie in their set being 1981’s ‘Burnin’ For You’!) but it was well played and well received, and hopefully erased memories of their appearance at the second Monsters Of Rock when, at a similar event to today’s, they died a painful death. Any set that includes ‘ME262’ and ‘Cities On Flame…’ is bound to be a winner, and ‘Buck’s Boogie’ was greeted like an old friend. Lean, mean and feisty, they came, saw and conquered, and mercifully they shaved the drum solo out of ‘Godzilla’ too.

In a similar vein followed SAXON; you know what you’re going to get with Saxon, you know you won’t be disappointed, and although again the setlist ended up (with just one exception) coming Tardis-like from the early Eighties, by now everyone was having too much fun to care. Three songs were reprised from their first ever UK festival appearance at Donington in 1980 (but you wouldn’t expect them to go home without playing ‘Motorcycle Man’, ‘747…’ and ‘Wheels Of Steel’ anyway) and the song inspired by that day also made the cut (not that that was much of a surprise either). Like a snuggly blanket or your favourite jumper Saxon are always welcome and always warming. If only all bands were as dependable as this…

On the Main Stage Biff and the boys were followed Dream Theater but, more appealing, on the Prog Stage ANATHEMA were getting ready (although ten spare minute was just enough to see James LaBrie and the boys romp through ‘Metropolis – Part 1’ in its entirety). Anathema have come a long way over the years but are finally and rightfully being recognised as one of the most exciting and incisive bands the UK has to offer. It’s impossible not to get enveloped in the raw passion their songs project, although a hint of Scouse humour did provide some levity when it was most needed. Pick a song – any song – from their eight-song set and marvel at its inventiveness and hunger. They have no equals, Anathema; they truly are giants. Scouse giants. Now there’s a thought! But in all seriousness, they were the best band on the weekend. End of debate.

Due on at 8:40, the SCORPIONS delayed their entrance until almost 9:10 – co-incidentally the time Camel would due to headline the Prog Stage – presumably to ensure that they were the Real Headliners and the band to close the night. This meant that the people who had hoped to catch their opening twenty-five minutes or so before setting off to see Andy Latimer’s band were spared the embarrassment of watching what was such a great act going through the motions (as BÖC might have said). The Scorpions were all fur coat and no knickers. Strip away the eye-watering back projections and huge stage and you were left with five old blokes trying desperately to recapture long lost glories. A medley of four older songs was shoehorned into the set and, although badly executed, served to show (a) why this band was so rightly revered for so long and (b) just how bad by comparison their new material is. ‘Don’t Stop At The Top’ they once famously proclaimed, and they certainly haven’t. So, so disappointing... As we decamped to catch Camel’s last number (the sublime and beautifully played ‘Lady Fantasy’) we wondered, on the strength of that one song, if by watching the Scorpions we’d well and truly backed the wrong horse.