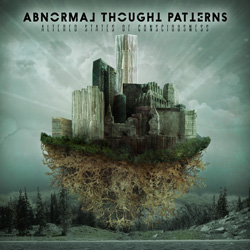 I’ll freely admit from the off that I’m a big fan of Abnormal Thought Patterns – in fact of anything the Tipton twins Jasun (guitars) and Troy (bass) turn their hands to – so when one of the guys at Lifeforce Records suggested that ATP’s upcoming third album was even better than its predecessor ‘Manipulation Under Anesthesia’ I was more than simply curious. Y’know, you do expect some hyperbole from record labels anyway, but how – in theory at least – could Jasun, Troy and drummer Mike Guy better ‘Manipulation…’. Equal it, maybe, but better it? Surely some mistake, as they used to say in Sounds…

Fast forward a couple of weeks though, and if I had a hat I’d be eating it. Although instantly recognisable as ATP, ‘Altered States Of Consciousness’ takes the band’s sound and pushes and pulls it in all manner of new directions. Zero Hour (the Bay Area trio’s previous outfit) were never a band to let the grass grow under their collective feet, but ATP seem to like to move forward not just in big steps but in seismic shifts. Opener ‘Distortions Of Perception’ swaggers like Satriani on steroids and sets the listener on a path of seven exciting but demanding work-outs: nothing comes easy on this album, the songs challenge the senses, but ultimately you take out of it as much as you put in. Listen to it carefully and you’ll hear the magic within each track. And boy, is there magic to be heard! 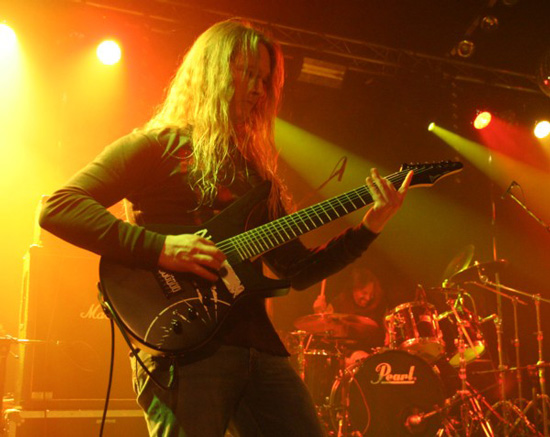 The principle difference though between ‘Altered States Of Consciousness’ and its predecessors ‘Manuipulation…’ (released in 2013) and the band’s 2011 self-titled debut is that for the first time on an Abnormal Thought Patterns album there’s vocals to be heard. “I had about three-and-a-half minutes of the song ‘Nocturnal Haven’ put together,” recalls Jasun. “I decided to play it to Troy and he immediately said ‘couldn’t you hear someone like Tommy [Rogers] of Between The Buried And Me all over this song?’ I gave him a look and said something like ‘yeah, like that’s going to happen’. After he’d said that though I couldn’t help but think of Tommy's vocals all over the song as I was writing the rest of it, and it just took shape due to that. I was of course open to the idea, but kept insisting to Troy that there's no way he’d do it. However, without me knowing Troy contacted Stefan at Lifeforce Records and asked if he could get us in contact with Tommy. We’re both huge fans of both him and Between The Buried And Me, but we were prepared that more than likely Tommy wouldn’t be available due to his extremely busy schedule, and then Stefan came back with an email letting us know Tommy was interested. We were beside ourselves as, as I said, we always pictured Tommy's vocals and writing style over the jam. It was pretty much written with him in mind. We sent Tommy the song, telling him how we totally dig his writing and vocals, and he got back to us saying he was excited to be part of it and that he was a fan of Zero Hour. Obviously we were beyond stoked for so many reasons! Right away Tommy had some ideas as he wanted to change up the song structure a little bit. Troy had some ideas as well and it all came together. Tommy is the real deal and such an amazing person to work with. And my brother is now a genius in my eyes for making this happen in the first place!” ‘Nocturnal Haven’ appears in two different forms on the album, the vocal version occupying the second-on-the-disc slot and the slightly longer instrumental version appearing as the album’s penultimate track.

And that’s not the end of the guest list either. “We’re so proud and ecstatic to have five amazingly talented musicians on ‘Altered States Of Consciousness’,” enthuses the guitarist. Alongside Tommy Rogers’ contributions, “a dream came true for Troy as we had two of his bass heroes Michael Manring and John Onder hit out some solos on ‘Synesthesia’. Their playing speaks for itself and, not only are they amazing bass players, they’re some of the coolest cats you can ever chat with. And on the instrumental version of ‘Nocturnal Haven’ we have the amazing guitar talents of Jeff Loomis and Tim Roth. Jeff is truly the new guitar hero for so many; after Jason Becker and Marty Friedman, Jeff has kept the shred flag strongly waving with his amazing playing. He’s been around for a while but is still so current in the guitar world. He’s a really good guy and such a beast of a player. And I’m proud to say I have a great friend in Tim Roth. He’s an outstanding guitar player and writer, one of the best guys in the music world and someone who has always looked out for my brother and I. He took us out on the road with his group Into Eternity in 2013 to help us support ‘Manipulation Under Anesthesia’. He did an absolutely beautiful piece for ‘Nocturnal Haven’. I can't say enough about all these guys. Their contributions to the album were immense.”

The album itself started to come together right after the band had finished working on ‘Manipulation…’. Jasun admits realising that the band’s second album would be hard to top. “‘Manipulation Under Anesthesia" is a super strong release,” he concedes, justifiably proud of it. “But right after we finished the ‘Manipulation…’ material, I started seeking out inspiration on how to better my writing and playing. I got an eight-string and worked on a little different writing style for myself, and ‘Altered States…’ was the result. Start to finish the album is exactly what we wanted to create, but the material pushed me with my writing and playing like no other. This album was painful – and I mean painful! – to put together. It didn’t come easy and I kept pushing everything I had with the material. I would love to tell you it wrote itself. ‘Manipulation…’ actually felt like it did write itself, and it was very easy to do. ‘Altered States…’ though is extremely focused start to finish and took a ton of work to complete. Listening back to the material now I’m so very proud of it that I can say it was easily worth it! At least,” he laughs, “I can finally say that now!”