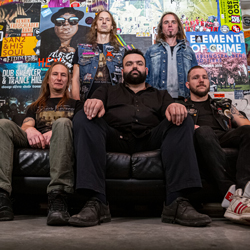 Before it became synonymous with bands with pounding double bass drums and seemingly ever-smiling guitarists in the mid-Eighties, ‘power metal’ was the term used to describe bands like, say, Savatage – powerful, technically expressive and adrenaline-charged, yet still easily accessible and metal to the bone. That same definition would be perfect to sum up Germany’s Reaper’s Revenge whose third album ‘Versus’ is about to be unleashed. Formed in 2013, the Bavarian band released ‘Wall Of Fear And Darkness’ in 2014, and followed it with ‘Virtual Impulse’ four years later. Preceded by a single, ‘Phlegmatrix’, in August, ‘Versus’ is an accomplished album, exciting and dramatic in equal measure. It’s rather unique too, as the musicians have blended a range of influences to create an album with wide appeal and great depth without sacrificing the inherent heaviness expected of the band

Q1. Can you give me a quick history of Reaper’s Revenge, please?

“We started in 2013 and released our first album ‘Wall Of Fear And Darkness’ in October 2014. After that we’ve been rocking around the stages, and wrote our second album ‘Virtual Impulse’, which was released February 2018. After that we’ve been rocking stages again and had to deal with some line-up changes. Meanwhile, we’d already started writing new music. Due to Corona things were a bit more difficult but we ended the songwriting process in summer 2020 and started recording again. The result is our new album, ‘Versus,’ which will be released on 8 October.”

Q2. And how did the name come about?

“There’s no big story behind it. When we started and realised that this musical project was going to work out we knew that we had to come up with a band name. So everybody did some brainstorming at home and we looked for the best name in the next rehearsal. Reaper’s Revenge was the one that we liked most. I think the idea came from our former bassist Dominique [Hoffman].” 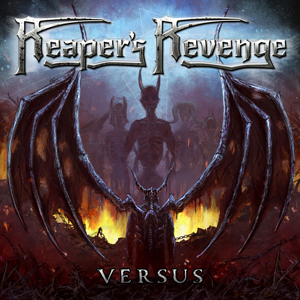 Q3. What did you set out to achieve when you write and recorded ‘Versus’? And do you think you achieved it?

“Of course, we wanted to write the best-selling record in the world!” they laugh. “Let’s see if we did well enough. Most likely not... But, that aside, our aim is always to write music that we love and can fully stand behind – music and lyrics – and in our opinion we achieved that. Now we just need some people who have the same taste musically as we do and everything will be fine!”

Q4. How does the new album compare to its predecessors, do you think?

“The recipe was pretty much the same as before: heavy / power metal mixed with thrashy and, at times, progressive elements. As such, ‘Versus’ is a continuation of what we started with the first two albums. ‘Wall Of Fear And Darkness’ had a bit more of the proggy vibes, while ‘Virtual Impulse’ is the more simple and thrashy album. With ‘Versus’ we think we found the right combination between those two earlier records.”

Q5. The cover artwork looks stunning – whose idea was that?

“Regarding all the media stuff we have some good friends who are responsible for all the artwork, shirt designs and music videos. We’ve been working with them since the beginning and we always give them the opportunity to bring in their own ideas. And, as always, their idea was overwhelming and we didn’t need to change anything. Of course those two are the ones who hear the earliest versions of our songs so that they know right from the start about the direction of our new stuff. The cover itself represents the song ‘Warheads’ which in itself is also the song that represents the album’s title.”

Q6. What album (or albums) made you think “I want to be a musician; I want to do that”?

Christian Oppel: “When I heard ‘Live After Death’ for the first time I knew that I have to play bass.”

Christopher: “I think it was just one song that implemented that virus of feeling the need to play guitar when I was a small child: Queen’s ‘We Will Rock You’.”

Hermann: “In my case it was Deep Purple’s ‘Made in Japan’ that awoke my passion for playing guitar.”

Christian Bösl: “Bon Jovi gave me the idea of being a singer with ‘Slippery When Wet’.”

Q7. What film do you think ‘Versus’ could be the soundtrack to?

Q8. What are Reaper’s Revenge’s strengths as a band?

“We are five metalheads with different roots in metal. Therefore we have the chance to combine those different influences and create our own heavy/power metal.”

Q9. What’s next for Reaper’s Revenge?

“Hopefully a lot of live gigs. Unfortunately it’s not that easy to find gigs at the moment because of Covid19. If we can’t fill our time with playing live, we’ll just start to write new music.”

Q10. If you drove an ice cream van, what tune would it play? Thinking about it, do you actually have ice cream vans in Bavaria?

“Sadly, we don’t have ice cream vans here. But of course there’s only one possible answer:
‘Ice In The Sunshine’ [a novelty hit by German pop act Beagle Music Ltd from 1986]. Maybe we would have to record a metal version if there isn’t already one in existence!”