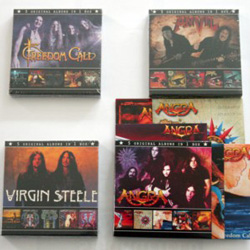 SPV continue their ‘5 Original Albums In 1 Box’ series with releases by Angra, Anvil, Freedom Call and Virgin Steele, each (fairly obviously) containing five original albums in a replica sleeve slipcase. To try and review them in time for release would be pretty much impossible, but just to give you a heads-up here’s what’s in each box. Kicking off with ANGRA (taking things strictly in alphabetical order), the Brazilians’ set offers releases from 1993 to 1998, opening with their debut album ‘Angels Cry’ and then picking up ‘Holy Land’, the ‘Freedom Call’ EP, ‘Holy Live’ and finally ‘Fireworks’. The loveable and resolute Canadians ANVIL serve up ten years’ worth of metal, starting with 1987’s ‘Strength of Steel’ and then delivering the next four consecutive studio releases ‘Pound For Pound’, ‘Worth The Weight’, ‘Plugged In Permanent’ and finally ‘Absolutely No Alternative’. Over in Germany, FREEDOM CALL’s second set in this series kicks off with ‘Legend Of The Shadowking’ from 2010; the two discs of ‘Live In Hellvetia’, ‘Land Of The Crimson Dawn’ and their 2013 ‘best of’ ‘Ages Of Light’ make up the set. And finally, VIRGIN STEELE’s collection starts with 1985’s ‘Noble Savage’ and then picks up their next four albums ‘Age Of Consent’, ‘Life Among The Ruins’ and the two parts of ‘The Marriage Of Heaven And Hell’.

And if that’s not enough, there’s just time to squeeze in a pre-Christmas mention for Italian workhorses ALLTHENIKO whose video clip for a new cut ‘Waste Of Time’ has just been posted on YouTube. A truly fabulous cut, ‘Waste Of Time’ is like a runaway train, with a frenetic riff and a seemingly unstoppable rhythm section. The band have been recording since 2002, and on the strength of this track are Italy’s secret weapon. Check them out at: https://www.youtube.com/watch?v=4qKTlBOn1wk

Merry Metal Christmas, and see you in 2017
John