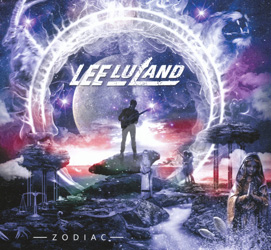 “Well, I wanted to create an album that I would listen to and not get bored,” replies Lee Luland, when asked about what he set out to achieve with ‘Zodiac’. “The album had to have plenty of guitar work, epic orchestrations and enough technicality to keep things interesting. In the end, I was actually very happy with the final result. Which is rare to be honest,” he adds, “as I normally hate listening to my own music once it’s finished!”

It’s been a frantic few days for Luland, a guitarist and songwriter of immense talent who’s probably better known for his work with UK progressive metal band Prospekt: “the same week my solo album came out, my son was born so it was a pretty hectic, amazing time,” he laughs. At least the album shouldn’t give him sleepless nights. ‘Zodiac’, his first solo release, is an extremely accomplished CD with a great sound and some exceptionally exciting songs, and is a delight for fans and musicians alike. It also flows beautifully, a facet that’s more by design than accident. “I would say that one of its strengths would be the flow of the album,” he confirms. “I try to make an album the old-fashioned way, as if you were to listen to it in one sitting. So it’s got ups and downs, heavy parts with more ballad-esque moments, and I like to think there are a few cool solos in there,” he laughs. “My favourite is probably ‘Sagittarius A*’ as it’s pretty over-the-top and contains over five thousand notes!” 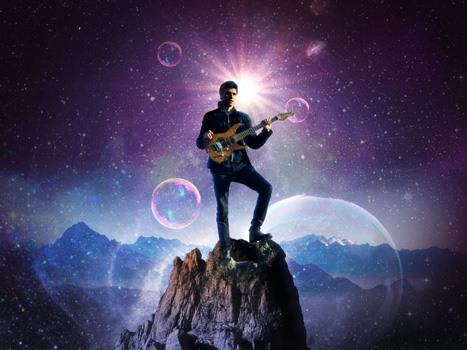 Despite being wholly instrumental (and note that Luland does absolutely everything on the album aside from the artwork), ‘Zodiac’ is an extremely varied offering, with ‘Aquarius Rising’ coming over like some of Joe Satriani’s heavy outings, ‘Eyes Of Orpheus’ having some Dream Theater swagger, ‘Prophecy’ being a sweeping, cinematic soundscape and finger-shredding opener ‘Mortal’ speeding along like Yngwie Malmsteen in his prime. “Yeah, Yngwie for sure is one of my biggest influences,” he admits, “but there are so many others. To name a few: Greg Howe, Marty Friedman, Paul Wardingham, Michael Romeo, Andre Nieri, Michael Lee Firkins, Richie Kotzen, Allan Holdsworth, Stephan Forte...

“I’ve always wanted to do an instrumental-based guitar album,” he continues. “Having been brought up on the Shrapnel-era guitarists, it’s always been a goal of mine to release a crazy guitar album. Plus I love film music and wanted to try and get a cinematic vibe going on. The songs all took shape pretty quickly. I think I wrote them all in the space of about two weeks. Then I demoed them on Cubase and, after moving house, began the full recording process. With all the orchestration I wanted on top, it took a while. I kind of became a bit obsessed with it all as I was learning the orchestration process as I went along. It was a lot of fun though, and as soon as the songs had drums, bass and orchestration I would re-track the guitars. With the orchestral backing, it inspired me more to create the best possible guitar parts I could.”

There’s no title track as such, but many of the titles – and the artwork – are very cosmic (in the true rather than the Sixties sense of the word – more the rage of Aquarius than the ‘Age Of Aquarius’!). “Well, the album is to do with the cosmos and the planets etc. Star signs play role in all that and I thought it would be a cool concept for the album art. Though,” he admits, “to be 100% honest I think I was watching the movie ‘Zodiac’ and thought it would make a good album title!”

Obviously the day job with Prospekt and the new addition to the family will keep Luland busy for a while, but he acknowledges he’d love to tour ‘Zodiac’ if at all possible. “If it were to reach a wide enough audience, I’d definitely take it out on the road. At the moment though, I’d be happy to follow it up with another album. I just love writing music so will no doubt be back in the studio soon.” Not bad for someone who almost became a bassist rather than a guitarist. “I actually came pretty close to playing bass over guitar as the guy in the shop said it was easier to pick up. I was thirteen and thought, ‘that’s cool, four strings are easier than six, I guess’ but then Dad said no, so here I am nineteen years later counting my lucky stars for those two extra strings!”