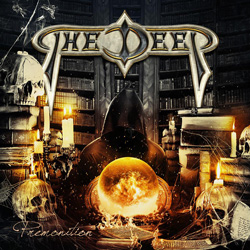 ‘Authentic’ is a word that springs to mind when you sit and listen to ‘Premonition’, the first album from London-based band The Deep. It crops up later during the interview, when guitarist Paul Smith notes that “authenticity was very important to us;” and in maintaining that authenticity, and in playing with the hearts of eighteen-year-olds, the band have delivered a truly exciting set of songs, largely conceived back in the glory days of the NWOBHM but soundly strenuously and gloriously contemporary.

So, who are The Deep? The majority of NWOBHM fans will be aware that Deep Machine had quite a chequered career, with a cast of famous names coming and going with the regularity of planes at Heathrow. One such line-up featured vocalist Tony Coldham, guitarists Tony Harris and Paul Smith, bassist Andy Wrighton and drummer Steve Kingsley. Unfortunately, as with so many great bands of the time, the band was unable to keep body and soul together and eventually split up; Coldham, Harris and Smith went on to form Strutt, Wrighton joined previous Deep Machine guitarist John Wiggins in Tokyo Blade and Kingsley joined Rogue Male. So far, so NWOBHM… But in 2012, this particular line-up of Deep Machine got together for a blast and decided that there was a still plenty left in the ‘unfinished business’ file, and so, as an earlier incarnation of Deep Machine was already up and running, a new name was required and The Deep was born. As in days gone by it took a while to settle the line-up, but The Deep now features guitarist Mick Feleppa and bassist Don Whiberley alongside Coldham, Smith and Kingsley. Tony Harris, although unable to play guitar due to an illness, still plays a part in the band’s songwriting and arrangements.

‘Premonition’ features five songs from the Deep Machine days of 1982 set list – ‘The Rider’, ‘Night-Stalker’, ‘Premonition’, ‘Spell-Bound’ and ‘Saga’. Another four (‘All I Want’, ‘You Take My Breath Away’, ‘Out Of Touch’ and ‘Turn Me Loose’) come from the Strutt back catalogue and ‘Cold-Hearted’ was written in the early Nineties by Coldham and Smith during their ‘The Rodford Files’ project. Despite their age, the songs have a timelessness: although most of them are thirty years old and betray their NWOBHM roots they have a contemporary edge and could easily have been written last month. “I think,” begins Paul Smith, “the songs have stood the test of time because they are well-written songs. Also, as musicians we have thirty years more experience behind us and in all that time you don’t stop listening to music so you can’t help but pick up more contemporary influences along the way. We are playing in the present and not in the past, and I personally think that reflects in the energy that comes across when listening to ‘Premonition’.” Mick Feleppa – also a member of Strutt – is nodding his head in agreement. “Absolutely! They may be old songs but we play them as though they were written yesterday. And,” he adds, “we play them with passion from today!

“‘Premonition’,” Feleppa continues, “is very much the album we would have recorded thirty years ago, if we could have secured a record deal at the time. I think we all regretted the fact that these songs never actually made it to vinyl back then and so it was a ‘no brainer’ to get them down onto something that can now live on.”

“I always felt that we were incredibly unlucky not to get signed back then,” Tony Coldham breaks in, “and that musically there was a lot of unfinished business from that time.”

“I think it was obvious from the moment we got back together that we would want to capture the songs we had played from the early Eighties to the early Nineties,” says Smith. “An album was always on the cards. We did do a demo of ‘Saga’ and ‘Night-Stalker’ back in the day and there were some live tapes being traded in Europe, but there was plenty of material people either hadn’t heard at all, or hadn’t been recorded properly in a studio.”

“Modern recording techniques have been invaluable in allowing us to create the album we wanted,” says Coldham, “but also to be able to do it on a shoe-string budget. Whilst it was always important to keep the songs true to their roots tonally and stylistically, it was also essential to have a level of production that would stand up well against contemporary recordings today. I think we got that and we have to be pleased with the results.”

“Authenticity was very important to us,” agrees Smith. “We love the songs and wanted them to be heard in the way they were meant to be heard. So we made every effort to keep the arrangements of the songs the same as we played them then and play them live now. And, funnily enough, we seem to have become accessible to a whole new generation of listeners in a way we wouldn’t have predicted. Teens and young adults love the album.” Feleppa laughs. “Yeah, the biggest surprise is that it seems to have gained the respect of my twenty-two-year-old son!”

‘Premonition’ features a fine array of memorable and melodic songs (closer ‘Turn Me Loose’, for example, is pretty much the best two songs Y&T never wrote) with some stunning trademarks – the twin lead guitar across the album is amazing. This band knows what makes a striking song.

“It’s true that we do try to build memorable melodies into our songwriting,” agrees Feleppa. “It’s not our style to chug and riff away self-indulgently. It’s all about the journey and the listener. And as a band we’re all on the same page in terms of songwriting and arranging etc: the chemistry in the band is dead right. Some songs start with a guitar riff and we build from there, some are a combination of two or three ideas that gel well together, some start with the vocal melody and we backfill with guitar. Tony tends to write very much like you would expect a lead singer to write, with melody and intricacies at the forefront, whereas for me it’s more about root notes and building on from there. Paul dovetails brilliantly into both styles.”

“Whether I’m working out a guitar solo or writing a song I have always tried to do something different, which has a musicality to it that would interest the listener,” Smith continues. “When writing a song I start by trying unconventional chords to get a different slant and vibe, which hopefully lights a spark for a good idea that can be taken to its conclusion. It doesn’t always work out but it’s a method that works for me.”

“Historically, I always found it hard to get my musical ideas across because I can’t play guitar to the standards these guys can,” adds Coldham. “It’s frustrating, because I can hear it clearly in my head, but can’t demonstrate it to them. Luckily, as Mick said, Paul’s very good at bringing everything together, and he can intuitively pick up on what I’m trying to get across, so it’s much easier now. In terms of what I’m looking for in a song, for me, I like to hear lots of dynamics. Rock is exciting and emotional music, and that’s the way we write and perform it.”

This is a band who take their music very seriously indeed – much more seriously than they take themselves, another good sign for the future. As an ice breaker I’d asked them to describe themselves, to be greeted with Feleppa’s musings that “Tony is a leader, Paul is a guitar god, Steve is the seeker of truth and justice, I muck about too much and Don's mission is to keep us in the present and not the past.”

“Yep,” laughs Coldham, “that about sums it up!”

I’ve got a premonition that this band have got a lot more to say yet!