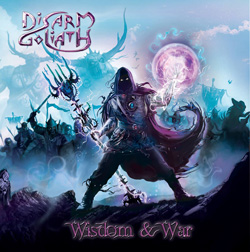 There’s something wholly refreshing about UK bands like Disarm Goliath. Unashamedly metal, brutally honest, fiercely independent and disarmingly (sorry!) engaging they’re impossible not to like, with music which comes straight from the DNA of classic Eighties leather ‘n’ studs with a twenty-first century twist, and a can-do attitude that comes straight from the heart. Cut these guys in half and you’ll be mopping up liquid metal rather than blood. “The current Disarm Goliath line-up has been together for six years now,” says founder member Steve Surch at one point in our discussion, “and although we are five very different people the one thing we are united on is a passion for making heavy metal music. And I know that that sounds corny, but it’s true.”

Based in the Midlands, Disarm Goliath have recently been putting the finishing touches to their third album, ‘Wisdom & War’, which Steve describes as “a strong, traditional heavy metal album.” The band itself was formed by Steve, then bassist/vocalist, in the Nineties, in the dim, dark days, he recalls, “when Rob Halford was no longer in Priest and Bruce Dickinson hadn’t yet re-joined Maiden. Trad metal was going through a rough time and was getting a lot of flak which pissed me off so I wanted to start my own metal band to try and put things right. As you do. It wasn’t easy starting out, though: I didn’t meet [drummer] Karl Wade till the late Nineties, and since then we’ve seen many bands on the circuit come and go as well as many ’Goliath band members!”

Recorded by Steve, Karl and guitarist Ben Oakley, the band’s debut album ‘Only The Devil Can Stop Us’ came out in late 2001, and the band gigged whenever and wherever they could to promote it. “It was tough though,” notes Steve, “and getting gigs was difficult. The following year we had a good review in an American ’zine but someone said ‘yeah, but you'll never play over there’ and I thought, why not? So I sent a bunch of promo stuff over to different promoters in California and most of them said they would book us so we made it happen. We ended up playing a string of shows including the Whiskey A Go Go in Hollywood in was 2003. Not long after we came back home we had an offer from a promoter on the East Coast to play there the following year so in 2004 we went back.

“In 2006 Ben left,” he continues, “but in walked current guitarist Steve Beville.” At the same time, things started to pick up. “The following year more gigs came our way, and High Roller Records approached us about releasing ‘Only The Devil...’ on vinyl. 2008 saw us release the ‘Man, Machine & Murder’ EP and although the songs were good we realised other aspects weren’t. More changes were needed and 2009 saw the arrival of vocalist Steve Bell which was not only a boost for the band but it also took a lot of pressure off me – I’d taken the vocal duties as far as I could so now I could focus on playing the bass, and Steve’s range meant that we could write almost anything. Not long after Steve joined we recruited a second guitarist, Anthony Ellis; his arrival gave us more options and meant that we could really run with the twin-guitar attack.”

UK dates in 2011 with Blaze Bayley and White Wizzard raised Disarm Goliath’s profile. “The following year we wrote and recorded the ‘Born To Rule’ album, the first release to feature Steve and Ant. This was also released on limited edition vinyl via another German label called Pure Steel Records. Around this time we opened up for Soil and Fozzy and played many gigs up and down the country which continued until 2014 when we started thinking about writing a new album. Throw in many venues, writing songs, broken strings, fans, MySpace, Facebook, weddings, zombie apocalypse, blood, sweat and tears and you have the Disarm Goliath of today – proud, energetic and coming to a venue near you!”

It should come as no surprise that, like its predecessors, ‘Wisdom &War’ revels in being metal through and through. Intense, driving songs, twin lead breaks and a heads-down no-nonsense approach driven by passion and vitality are all hallmarks of the band, but this time around their experience has given the album a more rounded but more forceful approach. It’s almost as if they’ve grown tired on knocking on the door and decided instead to kick it down.

“We were fortunate that we had an abundance of ideas by the time it came to the writing sessions,” recalls, Steve. “Every member of the band is quite prolific so we never found ourselves struggling for new material. When we all got together everyone was chomping at the bit to show off their ideas so it all came together fairly quickly, and we’re very happy with the way it’s turned out. There’s always added pressure when you go it alone with a limited budget but we knew the kind of album we wanted to make, and we’d self-produced ‘Born To Rule’ so we were pretty familiar with working in the studio. And the mixing of the album was handled by Steve Beville, so really the whole process from start to finish has been very much a band project.

As for the album’s strengths, “I think they lie in the quality of the songs and everyone’s individual performances,” he comments. “I think everyone played a blinder! And we did spend more time on the production this time around and I think it shows. The recording and mixing is better than the last album, and this took time, but was worth it. As for the songs, I think there’s something for everyone. And this wasn’t a conscious effort, it just came about that way. It’s great to see ‘Two Worlds’ on the album too as it’s a song that’s been around for a long time and shows a different side to the band.”

Unlike the previous albums whose titles are fairly self-explanatory, ‘Wisdom & War’ offers a contradiction in terms, the meaning of which Steve is keen to explain. “This time around, rather than using one of the songs as the album title, we wanted something that summed up the whole album. Several of the songs deal with conflict, whether it be man against man or a conflict within oneself, and these are things that mankind has dealt with for thousands of years. The modern world likes to see itself as civilised, wise and well-educated but we’re still making the same mistakes as we did in the past. So how far have we really come? We are still waging wars, still killing each other and now we are killing the planet on which we live, and I think ‘Wisdom & War’ sums all this up.”

The same methodology doesn’t apply to the band’s name though. “I would love to say that there was some weird and wonderful way that we came up with the name but,” he laughs, “there isn’t! It just came out of writing a long list of words that sounded ‘metal’ and piecing them together. ‘Disarm’ was written on one list and ‘Goliath’ on another. Sorry if that’s a bit boring,” he adds, almost by way of apology.

In closing, I wondered if there was a piece of trivia about Disarm Goliath that Steve would be willing to share. He thinks for a moment and then says: “to pass the time on long gig journeys we take it in turns to do Arnold Schwarzenegger impressions.” Another laugh. “Ant's is the most authentic by far. So in the words of Arnie – or Ant – ‘hasta la vista, baby.’”

‘Wisdom & War’ is released on 1st July. To get a copy go to the webshop at www.disarmgoliath.com