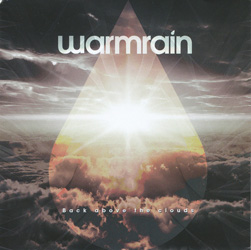 Warmrain originally came to the fore in 2011 with an EP called ‘Absent Friends’ and a debut gig at the High Voltage festival in Victoria Park, London. Described in Prog magazine as “a thoughtful calling card… A stately affair that shows some Floyd influences,” ‘Absent Friends’ featured three songs (‘Flying Dreams’, ‘Good To Belong’ and ‘Run To The Sun’) alongside the title track and was recorded by guitarist Matthew Lerwill, bassist Simon Bradshaw and drummer Steve Beatty, with Russell undertaking guitar and vocal duties. Despite talk of an album Russell pointed out in the feature that it wouldn’t be finished until it was ready. “Taking enough time is important,” he noted. “All that urgency and desperation you experience as a twenty-one-year-old has gone.” That said, even he probably didn’t think it would take this long to complete it. 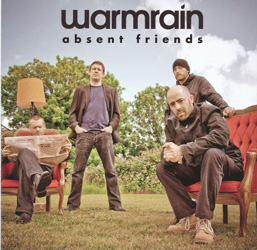 The intervening years have not been time wasted. Recorded by the same line-up as the EP with the exception of Russell playing the drums as well ("Steve has far too much else to do," he explains) their debut album ‘Back Above The Clouds’ is a huge, intense piece of work. Asked to describe it in one sentence, Russell suggests: “The documentation of one person’s journey back to themselves, triggered by the catalyst of heart-breaking loss.

“For me, ‘Back Above The Clouds’ is a healing tool. Every single person can relate to this – there isn’t one single person who doesn’t know what it feels like to experience loss. It’s massive, and it’s a game changer. Some part, some spark, is suddenly gone, and you need to find a way to deal with that. And that’s what this is about: it’s trying to help people. And it’s more than just the music. It’s my vision to release this as almost a universal healing aid by putting together a trans-media project whereby the story is told by different media. It’s more about trying to reach as many people as possible because I feel that people can benefit from this, and maybe not feel so alone.”

Although there is a fixed story running through the album there is what Russell calls “an elasticity to the way that you would perceive the time-line. The person who lived through the events in the songs kept a series of journals and each day documented the thoughts and feelings he was experiencing. The concept is that all the songs are extracts from the journals; someone has gone through them all and cherry-picked the most poignant and articulate moments that capture the shifts between this person’s feelings and emotions. However, the opening song ‘Fading Star’ is Friday 13th and the following track is ‘Absent Friends’, Thursday 9th. But at no point does it say what month or year; and by not specifying the exact date it leaves it to the listener to decide how long it took this person to get to the end of this process.”

Two songs from the first Warmrain EP ‘Absent Friends’ and ‘Flying Dreams’ both make a fresh appearance on ‘Back Above The Clouds’, although they are, in Russell’s words, “presented very differently.” Studio time was short when they did the EP so “we didn’t get to do a lot of stuff, production-wise, which we would have liked. Obviously when we did the album we could rectify this and take more time to create more feeling. And I was very conscious of presenting the songs differently this time around without ‘invalidating’ the EP. I didn’t want people thinking ‘oh, not this one again’!” he laughs.

Although the material was conceived and written by Russell, he freely admits that without his collaborators Warmrain would not exist. His friendship and working relationship with bassist Simon Bradshaw goes back over twenty-five years. At the beginning of Warmrain Bradshaw chose to take a step back from the equal partnership that they had shared in previous bands in order to facilitate and support Russell’s evolution as a songwriter. Instead, he built a home studio (Studio B) and it was there that the band’s material came together. Similarly, Russell and previous drummer Steve Beatty have been close friends for over twenty years. “I played him the track ‘Absent Friends’ and he was totally blown away. He asked if he could play the drums and our unnamed duo instantly became an unnamed three-piece!” It was Beatty who then introduced Matthew Lerwill to the band.

“I’d played in a couple of bands with Steve and he told me about Leon’s project. I’ve always known Leon from a heavier background as we played in metal bands; however, Steve knew how much I like the sort of thing that Leon had been putting together so Leon sent me the demo of ‘Absent Friends’ first off which was pretty comprehensive as it had strings and keyboards and backing vocals and sounded great. I fell in love with the sound immediately – beautifully crafted songs that put me in the mind of all my Seventies’ rock heroes… I loved the sound and the idea, and knew I could deliver what was being asked of me, which as I understood it was being a ‘hook man’. The songs did not require blistering lead breaks and slashing volume and speed, just gentle polishing in the form of the occasional simple hook. Leon liked my ideas and offered me more and more material, and we continued this process and became very comfortable playing together. Then I realised I was in the band!”

As for the band’s name, “the sixth song on the record is called ‘New Dawn’, although it was originally ‘Warm Rain’,” recalls Russell. Steve saw the title and said ‘that’s the band name’ and that was that, really. It was then just a matter of waiting for the right title for the song to present itself to me.” 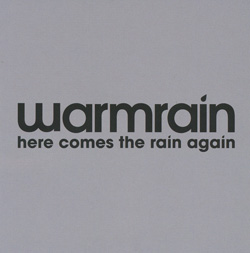 An EP featuring a sublime interpretation of Eurythmics’ ‘Here Comes The Rain Again’ will precede the album on 17 May. The non-album edit of the song features guest musicians Craig Blundell (Steven Wilson, Steve Hackett) on drums and mixer and co-producer John Mitchell playing keyboards, and will be accompanied by a sumptuous 4K video, shot at Dorchester Abbey on 20 February. The EP is completed by three non-album tracks ‘Shadow-Line’ ‘Paradigm’, ‘Keep Going’ and ‘Clock Watching Pt.1, Pt.2 & Pt.3’ written specifically for the release and these feature Warmrain’s new line-up with bassist Dom Ladd and drummer Jon McSwiney lining up alongside Russell and Lerwill. The full seven-minute version of ‘Here Comes The Rain Again’ will be included on ‘Back Above The Clouds’ as a bonus track.

“The abbey was a stunning setting, but it took me twenty-five emails to eventually convince the people at the Abbey that nothing Satanic was going to happen, nothing irreverent, we wouldn’t be sacrificing a goat at any point! I think that after a few emails many people might have given up. But I stick at things. That’s what I do. I see things through to the end. And twenty-five emails later we got an amazing venue to shoot the video in.”
And thanks to Russell’s persistence, Warmrain also have an amazing album to showcase.