A band currently making waves in their homeland are Seven Waters. Based in Hengelo (“that's in the East of The Netherlands,” vocalist Karen Leijzer helpfully explains) Seven Waters (who alongside Karen feature guitarist Michiel Liejzer, keyboard player Maarten Vloon, drummer Robert Molenaae and newbie Henk Kamersmans on bass) have recently released their second EP, a stunning four-tracker under the name ‘Hunter’s Prey’ which is a worthy addition to any metal fan’s collection. With Karen and Michiel up for answering a question or two, as an ice-breaker I asked them to give me the two-minute history of how Seven Waters came into being. It’s Michiel who takes up the challenge. “The band was formed by our former second guitarist Bert [Post] in 2010 after the band he and I played in called it quits,” he recalls. “After struggling for a while to find a keyboard player we recorded our first EP ‘Pathfinder’ in 2012 with our current keyboard player Maarten as a session member. We played some shows, most notably with Delain in December 2012, after which there were again some personnel difficulties with our bass player and keyboard player leaving. Despite this we went on to record our second EP ‘Hunter’s Prey’ in 2015 and shot a video for it. Shortly after this we found a new bass player and with Maarten joining as a full member our line-up is finally complete again,” he adds, with a note of obvious relief. Karen then fills in a couple of gaps. “Bert had written a song and it needed female vocals, so we decided to do this together. After his band Irmin decided to call it a day we asked Michiel – also from Irmin – to join us. The guys started writing songs and I asked Gijs van Ouwerkerk to be our bass player. He did, and his former Solarisis bandmate Robert Molenaar joined us on drums. But before we recorded ‘Pathfinder’ Bert left as couldn't combine the band with his private life any more. [It’s worth noting that the credits on ‘Pathfinder’ read ‘a big thank you to Bert Post, the founder of Seven Waters…’] As Michiel said, in 2013 we had a pause and Gijs decided to part company with Seven Waters to give his full attention to his new band Heliophile; but with Maarten becoming a permanent member and Henk Kamersmans recently joining us on bass we have a full line-up once more.” 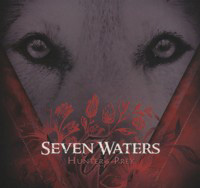 Like its predecessor, ‘Hunter’s Prey’ covers a lot of ground in just four tracks, and I wondered if the songs came together easily. Michiel laughs. “Well, yes, and no. For example, ‘Broken Images’ was a song that was basically written in an afternoon. I tend to write songs with a lot of variety and dynamics, for example ‘Mother Egypt’ but back then my fellow bandmates suggested I write a more in-your-face song. So I did. It was loosely inspired by a song from ‘Mercy Falls’ by Seventh Wonder. When I wrote this song I was heavily into progressive metal and the whole instrumental section was created with the intention of sounding weird. ‘Hunter’s Prey’ itself however was a bit of a struggle. I came up with the medieval intro very quickly. The first riff was created quickly too, but then I got stuck and it took a while to get it together. But I think it’s a song that represents Seven Waters 2015 really well. The intro makes it very exciting and the video complements the song beautifully. But ‘Mother Egypt’ is a song that took years to complete. I don’t even remember now when I started writing it but the sparkle was what was then the intro (the chords are the same but Maarten rearranged it extremely well). I think in all it took about five years before it was completed sometime in 2012. Listening back to it, it’s a very emotional song, and maybe that’s because it took so long to complete! And ‘Weight Of Loss’ was another quickie. This one just came very naturally. I got inspired after listening to a song from ‘Isolate’ by Circus Maximus. The open chords are really cool and I hadn’t done that much before. Also I think the guitar solo and following section are very strong.”

When it comes to talking about the lyrical inspiration for the songs, Karen takes over. “‘Hunter’s Prey’ is a song written for Kim ten Tusscher’s books ‘Jager & Prooi’, ‘Hunter and Prey’,” she adds, helpfully. “Michiel had already written a part of that song and I was extremely enthusiastic about it. I think it drove him mad because I told him the same thing every time I heard it and pushed him to finish it. It was such an inspiring song and before I knew it I’d completed it with a vocal line and lyrics. I really like the haunting intro, it fits so well with the books. On ‘Weight of Loss’ I needed a bit more time: it took a while to find the right vocal line and in the end the lyrics I had changed completely. Actually,” she adds, “the lyrics are very sad, about how you feel after you have to go on when losing the one you love. ‘Mother Egypt - All For Love’ is the love story of Cleopatra and Anthony, and was inspired by the Cleopatra books by Karen Essex and the play ‘All For Love’. As Michiel said, the song had existed for a long time, but it took me a while to finish the lyrics. Michiel had already written the intro and I wanted it to be about Cleopatra. When a song already has a theme I think it can be difficult to find the right words, but when Michiel and I were in the car one day I suddenly felt inspired and found the vibe I was looking for. And ‘Broken Images’ is about a dark period in your life, which took some inspiration from the ‘The Bridei Chronicles’ books of Juliet Marillier, the author of the ‘Sevenwaters’ books.”

Well, that saves asking where the band’s name came from! Although ‘Pathfinder’ is a sterling debut, there is an obvious progression on ‘Hunter’s Moon’. “As a whole, it’s more cohesive than the first EP,” says Michiel. “Also, the songs are structured better and the musicianship is at a higher level. Yes,” he sums up, “better songs, better sound and more professional.”

“I think ‘Pathfinder’ is a bit,” adds Karen, looking for the right words, “sweeter and calmer. Although I really do like the songs, I think that ‘Hunter's Prey’ has more power; and I have grown with my vocals, too.”

The progression within this exciting band looks set to snowball. “Until now, the roles within the band were pretty much pre-determined,” says Michiel, “as I handled the music and Karen handled the lyrics and vocal lines. But since we recorded ‘Hunter’s Prey’ I’ve been playing and writing together with Maarten which opens up a lot of doors. I tend to get stuck with songs and he is great in approaching it from another direction. He is also a very gifted musician and has a lot of theoretical knowledge from which the writing process benefits. And of course Robert and Henk are free to decide how they approach the demos.”

As for Seven Waters’ best gig to date “Delain!” –they pretty much shout in unison. “Multiple reasons,” continues the guitarist. “Firstly, it was the first time on the main stage of our home town venue Metropool; secondly, what a great feeling to play with a famous act like Delain; and thirdly, we played really, really well that evening.”

“There were a lot of people there too and they really liked our music,” adds Karen. “We want more gigs like this,” she laughs.

The band are already starting work on new songs with an eye to finally recording a full album “some time in 2016,” according to Michiel. “Besides that we obviously want to play more and more gigs and that’s something Karen is working hard on. But as a not-so-well-known band it can be really hard to get them.”

Something tells me that on the strength of ‘Hunter’s Prey’ Seven Waters won’t be “not-so-well-known” for much longer. For more information go to www.sevenwaters.nl