To be a fan of Diamond Head requires the patience of a saint, as new releases tend to come with the infrequency of sunshine in Swansea. I once remarked to Brian Tatler that Diamond Head were a frustrating band to be a fan of, to which he quipped “it’s a pretty frustrating band to be the guitarist of!” But this month sees the release of the band’s seventh studio album, the engagingly self-titled ‘Diamond Head’. Seemingly re-energised by the recruitment of vocalist Rasmus Bom Andersen in 2014, this time around the band have delivered an album which stands more as a statement of intent than just A.N.Other release, and in songs in particular like opener ‘Bones’ and ‘All The Reasons You Live’ the material harks back to what many would see as the glory days of ‘Lightning To The Nations’ and ‘Living On Borrowed Time’, while ‘Set My Soul On Fire’ would happily sit alongside the rest of the ‘Canterbury’ material. If you think that the previous twenty-first century releases ‘All Will Be Revealed’ and ‘What’s In Your Head?’ were a little mainstream and perhaps lacking in that old Diamond Head sparkle, then this is the album for you. 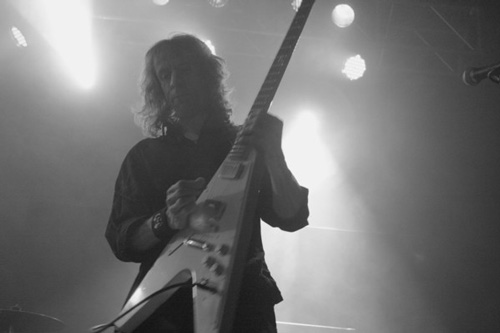 Writing for ‘Diamond Head’ started back in January 2015, almost eight years after ‘What’s In Your Head?’ made its appearance. In a number of previous conversations Tatler had admitted he was reticent to record a new album, but the catalyst, he now freely admits, was “the thought of working on new songs with Ras; he was great on the tour we did in 2014 so we began to talk about writing together. I had a few ideas that I had been working on since 2008 and did him a couple of CDs. I thought it was at least worth trying, and there was a lot of goodwill to make it happen. I’m always writing music at home anyway, and since 2008 I’ve been spending a lot of time with my good friend Dave (Shirt) Nicholls, Slipknot’s live sound engineer and co-producer of our last album. Shirt has a Pro Tools rig in his house and I’d go over and work on songs with him. So when it came to letting Ras have some new music to sing on in January 2015 I had about forty-five pieces earmarked for the album [don’t forget, this is the guy who reckoned Diamond Head had written over a hundred songs by the time they came to record ‘Lightning…’] and Abbz [guitarist Andy Abberley] had another eight of his own. Ras then selected songs or riffs that he could work on and we whittled it down to fourteen by April 2015. The rest of the work was done in the rehearsal room with the full band. Sometimes I just have a riff, sometimes I have most of the music, but they always go through a hefty re-write in the rehearsal room. Most songs go through about five or six different arrangements before we’re actually happy with them.” 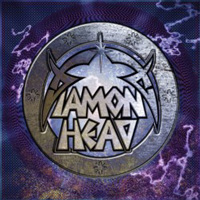 In the end eleven songs made the final cut, with little for the critics to grumble about. Aside from the addition of a new vocalist the rest of the band – drummer Karl Wilcox and bassist Eddie Moohan completing the line-up (for those that have been living in a cave for the past fifteen or so years!) – have been together for so long now they’re as tight as tight can be and know what they need to do to elevate a song from the ordinary to the extraordinary. And if ‘Wizard Sleeve’ is the album’s weakest link, it’s still redeemed by a scintillating solo and a steamroller riff which drives the song at such pace that it’s done ‘n’ dusted in just over three minutes. Otherwise it’s an album of such jewels and opulence that it’s hard to decide exactly what are the brightest gems, although the freeway burning ‘Speed’ – check out that solo! – and epic six-plus-minute closer ‘Silence’ do take some beating. And you have to admit that Andersen nails the vocal gymnastics that were seemingly Sean Harris’s trademark with consummate ease. “Ras has added a fresh new vibe to the band,” shrugs Tatler simply. “His melodies are awesome. I’m so impressed by his vocals and lyrics; even the guide vocals were superb!”

If there is an elephant in the room it’s the fact that everything the band does will inevitably be compared to ‘Lightning To The Nations’, the band’s self-pressed debut and one of the greatest metal albums of all time. Although it must always be the one thought lurking in the back of Tatler’s mind, he doesn’t allow it to be a pressure. “I try not to think about that, to be honest. All I can do is maintain quality control and try to write something that I like. I will not try and second-guess what fans might like; that seems patronising. We did try and make it sound like Diamond Head though, which I think seems fair enough!”