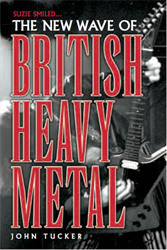 A personal perspective on the history of the NWOBHM, from its formation in the late Seventies through its peaks and troughs and on to its current status as one of metal’s most influential genres.

"The real story of the notorious NWOBHM is best told by the smaller bands who remember that fertile time with more veracity and without the inevitable rose tinted specs. That is what makes this historical book so great… A thorough collection of stories and memories from a time when British metal ruled the world." James Gill, Metal Hammer #161, January 2007 6/10

In his easy-to-read and knowledgeable way John has concentrated mostly on bands that were important to his own perception of what the NWOBHM was all about… ‘Suzie Smiled…’ is essential reading." Phil Ashcroft, Fireworks #25, November/December 2006

"A great book, embellished by some old black and white photos, which has taken pride of place on my bookshelf. Bloody well done, John!" Götz Kühnemund, Rock Hard #237 February 2007