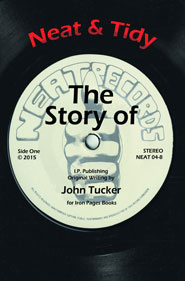 Launched on its true path with the release of ‘Don’t Touch Me There’ by Tygers Of Pan Tang at the end of 1979 Neat Records was arguably the most influential and innovative heavy metal label of the early Eighties. Irrevocably tied in with the New Wave Of British Heavy Metal, the Tyne & Wear-based independent embodied the genre – and furthered its cause – more than any other label, and in launching the careers of Raven and Venom it was instrumental in the splintering of what was then just heavy metal into subgenres like speed, thrash and death metal. ‘Neat & Tidy – The Story Of Neat Records’ examines the history of the label, its bands and their releases both through new interviews with many key players in the Neat Records’ story such as label boss David Wood and producer Steve Thompson, and the likes of Raven’s John Gallagher and Jeff ‘Mantas’ Dunn from Venom, and contemporary articles and reviews.