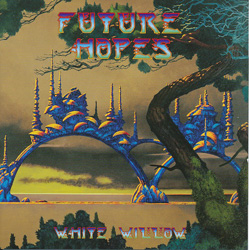 If you’re not familiar with White Willow, the following quote from the band’s own website might help: “White Willow is considered Norway’s foremost exponent of art-rock – by which people tend to mean pop songs stretched to pointless lengths and crammed with weird sounding instruments. And that happens to be pretty much what we do.”

As the band has been through numerous upheavals since their debut release ‘Ignis Fatuus’ in 1995 charting its personnel is not the easiest of tasks, but suffice to say the core players of Jacob Holm-Lupo (guitars and keyboards) and Mattias Olsen (drums, percussion, sounds and noises), together with synthesiser player Lars Fredrik Frøislie and bassist Ellen Andreas Wang, are seemingly aided and abetted by whichever virtuoso musicians the songs demand. ‘Future Hopes’ is the band’s seventh album release (remastered reissues notwithstanding) and is both their first since ‘Terminal Twilight’ in 2011 and the first feature vocalist Venke Knutson, a Norwegian pop singer with six Top Ten hits to her name and a collaborator with Holm-Lupo in his side-project The Opium Cartel.

In the world of progressive music where pretty much nothing is ever what it seems, White Willow remain seemingly indefinable – for starters, it’s not heavy enough for progressive metal, nor does it sit comfortably on the shelf marked progressive rock. As noted in the website quote, the band seem too restless to sit still, and with a Bowie-like chameleon approach to their music (in fact the title track could easily sit on ‘Blackstar’) they have no fear in stretching out in whatever direction their music – written from the heart, not the head – might take them. For the most part, the material on ‘Future Hopes’ is melodic and understated but humanist at heart, giving the album an existential core with light and shade provided by layers of keyboards, effortless (but never overplayed) guitar work and Knutson’s elegiac vocals. It’s an album to immerse yourself in, rather than confront, and allowing the ripples and tides of exquisite music to wash over you again and again will reveal hitherto unnoticed secrets.

Encased in a Roger Dean cover, the album boasts just five tracks, with a couple of bonus songs at the end, and although the likes of ‘In Dim Days’ and the instrumental ‘Where There Was a Sea There Is Abyss’ have a beguiling quality and charm it’s hard not to pick up on the band’s cover of ‘Animal Magnetism’; previously released as a single, the title track of Scorpions’ seventh studio album has been reworked so that it still maintains its identity but becomes a darker, scarier beast altogether, woven around a frenetic clarinet solo from David Krakauer.

The band’s website continues: “We’ve been at it since 1995 when we released ‘Ignis Fatuus’. Since then we’ve changed line-ups frequently, and gone through gradual stylistic shifts that have led us from a prog-folk via symphonic hard rock to something else. It is universally agreed that in spite of all these instabilities a White Willow album must contain certain constants: chiming guitar chords, mellotrons and songs about sad people.” What’s not to like?