A solo album from Saxon’s frontman Biff Byford has been an open secret for years, but a demanding day job and his recent health scares have conspired to lob spanner after spanner into the works. As such, it’s great to see ‘School Of Hard Knocks’, a collection of nine new songs and two covers, finally in the racks. Recorded with the backing of a wholly new band – although some familiar names do crop up in the album’s credits – ‘School Of Hard Knocks’ actually does a very good job of not sounding too much like a Saxon album, despite the band’s incredibly wide-ranging back catalogue and the singer’s extremely distinctive voice. 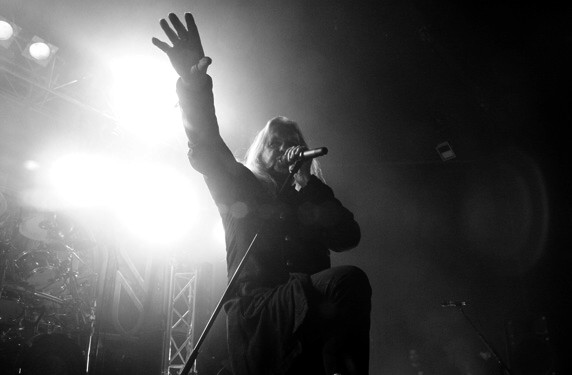 Does it work? Yes, it does. Overall, it can be described as a rather classy rock album that doesn’t try too hard to impress, and furthermore Biff and his cohorts – guitarist Fredrik Åkesson, bassist Gus Macricostas and drummer Christian Lundqvist, with special guests like Phil Campbell and Nibbs Carter offering their two penny’worth – don’t go out of their way to be too different, unlike some solo artists who go completely off-the-wall when let off the leash. The opening pair of ‘Welcome To the Show’ and the title track (two of the three cuts penned by the singer alone) play on Biff’s oft-used themes of gigs and class, both set to driving, hard-rock soundtracks. ‘School Of Hard Knocks’ itself is possibly the most Saxon-sounding cut on offer, although the two Biff / Carter compositions (‘Pedal To The Metal’ and ‘ Hearts Of Steel’) don’t stray too far from the beaten path either. If you’re already a Saxon fan, this is pretty much exactly the album you’ll have been expecting.

The singer acquits himself admirably on the band’s atmospheric version of ‘Scarborough Fair’, and their take on Wishbone Ash’s ‘Throw Down The Sword’ blends seamlessly with the rest of the album’s material. Elsewhere, the seven-plus minute epic ‘The Pit And The Pendulum’ boasts a solo to keep even the most die-hard metalhead happy, and if the Biff / Paul Quinn composition ‘Me And You (The Anniversary Song)’ veers a little uncomfortably, perhaps, towards Skid Row’s ‘I Remember You’, motivational album closer ‘Black And White’ pulls things back onto the straight and narrow once more.