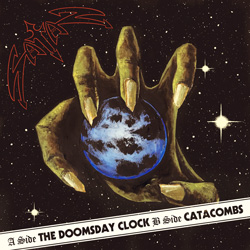 The opening single from ‘Cruel Magic’ – and thus Satan’s first offering for new label Metal Blade – is a frenetic and likeable affair, the acoustic intro a sucker punch for a high-speed gallop which, to my ears, doesn’t sound dissimilar to ‘Key To Oblivion’ from 1986’s ‘Into The Future’ EP, the first release under the Satan name after their stint as Blind Fury. As such, it doesn’t really break any new ground, but as Satan have yet to pen a bad song and the musicianship is, as usual, as good as it gets, ‘The Doomsday Clock’ is a wholly enjoyable workout. Brian Ross’s distinctive voice twists and turns while under the vocal line the twin leads of Russ Tippins and Steve Ramsey ebb and flow and the frenzied rhythm section of bassist Graeme English and powerhouse drummer Sean Taylor weave their own brand of metal magic. As a taster ‘The Doomsday Clock’ bodes well for the new album, due in September.

Non-album B-side ‘Catacombs’ is a sub-three minute thrash ‘n’ bash; like Usain Bolt on vinyl it keeps its head down and just sprints for the finish line. It’s never likely to make it onto a ‘Greatest Hits’ album but if the band decide to drop it into their live set it would keep the front rows on their toes; and that’s no bad thing.