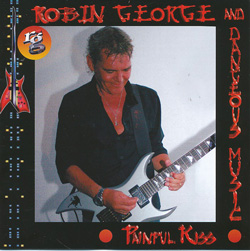 Singer, songwriter, guitarist producer… All hats worn by Robin George, but somehow – despite even being on the cover of Kerrang! way back when – the Midlands wonderkid never really got the breaks he deserved. He had all the right credentials, and his first solo album ‘Dangerous Music’ certainly copped the kudos it deserved, breaking into the UK chart and peaking at no.65 on its release in February 1985; it even spawned a minor hit single in ‘Heartline’, which only failed to match its parent album’s success by three places. But since then, despite some notable collaborations, George’s career has never really got into third gear. You can’t help but think that he must be happy with his lot, working at his own pace with whomsoever he chooses, but at the same time you can’t help but wonder what might have been, had he been able to capitalise on the success of what remains to this day one of the best pop metal albums ever recorded.

Fast-forward thirty years or so and George has formed a backing band named after that inspired first release with Charley Charlesworth on bass, Charlie Morgan on drums and George handling all guitars and vocals himself. For Dangerous Music’s first outing he’s pulled together a clutch of songs written for and recorded with other artists over the years and re-recorded them for the here and now, with contributions from some of the many people he’s worked with in the past and three new songs in the dozen on offer. Openers ‘Painful Kiss’ and ‘Lonesome Daze’ – both still poppy with a metal edge – kick-start things nicely, and nod stylistically back to 1985 and George’s first solo album, albeit with a twenty-first century twist. ‘The American Way’ is a snappy little pup originally recorded with Glenn Hughes (this version unfortunately still lurks in the vaults, officially at least) and the coupling of ‘Catarina’, complete with sax solo from the legendary Mel Collins, and ‘The Rubicon’ is pretty much worth the price of the album alone: if your toes aren’t tapping by this point in the album you’d best check you still have a pulse.

As someone who prefers George’s more direct material though I found the album meandered towards the end – it’s quite a mixed bag of material, after all – and over-long; the loss of a couple of songs would have made for a snappy, in-your-face ten-track album with more impact. They’re minor gripes though, and the tracks I’d happily sacrifice are probably someone else’s favourites. In the meantime, it’ll be great to see how well the material translates to the stage if and when Dangerous Music hit the road.