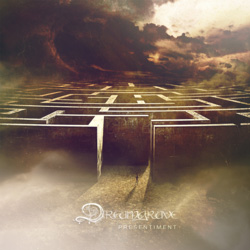 Despite Dömötör Gyimesi’s assertion that his homeland is not a hotbed of progressive metal – “we have some strong names here in Hungary who have been around for some time now, mainly mainstream and pop/metal bands apart from a few refreshing exceptions, but unfortunately progressive rock/metal is simply just not for Hungary,” he notes – the guitarist/vocalist has every reason to be pleased with himself and his band. Dreamgrave, which he formed in 2007, have just released their debut album ‘Presentiment’; a progressive metal fan’s dream, ‘Presentiment’ is as exciting as they come, twisting light and shade and juggling time and mood changes a-plenty, and it’s hard to believe that this is the band’s first full-length outing when many acts struggle all their lives to come up with something as innovative and electrifying.

What Dreamgrave have done on ‘Presentiment’ is blend a number of elements – progressive, melodic and gothic – in an entrancing and electrifying way. “We had this kind of mantra about 'the reintroduction of dark metal on a totally unexpected, progressive scale’ when we started preparing the material for the studio sessions,” comments Gyimesi, “and we meant it. For several years there have been better and better releases coming and going in the dark metal scene, some of which are among my favourites to this day, but for me none of them raised the tension or had the depth - the things I truly love in dark metal - any more. So what we wanted to achieve with ‘Presentiment’ was to push the audience out of their comfort zone by utilising unexpected patterns and mixtures of influences that hopefully introduces them to a new level of interaction between their feelings and progressive music. And,” he adds, “after the great reception we’ve got in the last months we think we pretty much succeeded.”

And who am I to disagree? ‘Presentiment’ is both dark and exhilarating, swaying between the abject brutality of Machine Head style riffing (check out ‘Black Spiral’) and the sublime beauty of the likes of ‘Memento Mori’. And in ‘It’s Ubiquitous’ the band have fashioned a slow-burner of ethereal magnificence, cut from the Anathema cloth but handwoven in a quite non-ubiquitous fashion. Across the album the clean and dirty vocals from Gyimesi and the beautiful voice of Mária Molnár are used to great effect, and with the keyboards also taking a lead role at times, rather than just producing a background soundscape, Dreamgrave have a full arsenal of explosive talent to draw on. 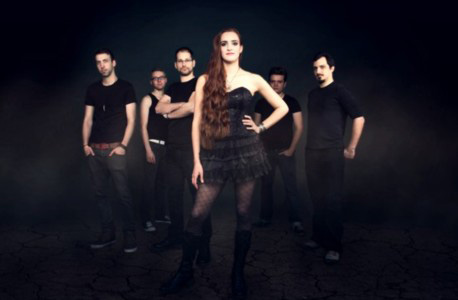 It might come as no surprise, given the band’s name, that they started life as a gothic outfit. “But after the unexpected,” he laughs, “success of our first demo in 2009 I had trouble keeping a stable line-up. The same old story! While the search has taken several years, I continued working on ideas which eventually became the foundation for ‘Presentiment’. The real blooming of the band, and the ‘Presentiment’ material, started when keyboard player and co-composer János Mayer joined in 2012. He refreshed the original progressive death/gothic slant with his progressive rock and heavily vocal-oriented approach. So while I’m the responsible for the Opethian progressive/death/psychedelic side of our music János is usually experimenting with thickly-layered vocals, calm interludes and completely sick time signatures, like 23/16! And then we became even stronger when Mária joined us with her uncannily evocative soprano voice. With the helpful hands of two session musicians we demoed and then recorded all the songs in the studio, and not long after the release we found the final members for the band.”

Despite the great press that ‘Presentiment’ has been picking up the members of Dreamgrave are not going to let the grass grow beneath their collective feet. “We’ve got a Hungarian tour and a couple of summer festival shows, after which we’re really determined to get out to Europe at least and ultimately be the Next Big Thing!” Gyimesi laughs. “And it would also be nice to at least finish the writing process of our second album this year. That would be cool.”

For information go to www.dreamgrave.com