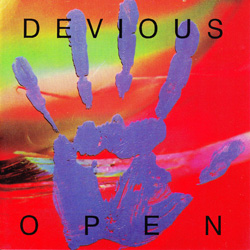 Devious were one of the Bristol bands which – the way I remember it, at least – helped the headbangin’ parts of the city hold out against fads and fashions and fly the flag for traditional hard rock. Unlike, say, Hunted or Brabazon though, Devious evolved with the times and ‘Open’ (which takes its name from the band’s self-pressed EP) rounds up all the material they recorded and shows how they moved in just three short years from British, anthemic hard rock through to the more ubiquitous grunge tones of the Nineties.

Coming together towards the end of 1993 they wasted little time in getting into their home town’s Coach House studios where the ‘Open’ EP was recorded. The four cuts from ‘Open’, uh, open this collection in rousing style, and if ‘Higher Than Anything’ is as fine a slice of the late Eighties/early Nineties hard rock pie as you’ll likely to devour, ‘More Than A Man’ slides down just as nicely.

The next three cuts come from a session recorded in February 1995, with the slower ‘Two To One’ showing the band still had the chops when they took their feet off the gas for a while, although as it’s a two-headed beast that powers up for its second half anyway its opening acoustic interlude is more trap than teaser. Just a month separates this session from the next, but the March recordings show the band embracing grunge, with ‘Chance To Fly’ and ‘Riverman’ being very much of that time and pick of the bunch ‘Visionary’ sounding like something Glenn Hughes might have put to tape. The album continues in the Nineties vein with the band channelling the likes of Alice In Chains in their June 1995 session which produced ‘Never’, ‘Ghettohead’ and ‘Drown Me’.

With the band’s final trip to the studio in January 1996 they seemed much more comfortable in their own skin and fused their grunge head and hard rock heart; ‘Deep Water Shine’ packs a groove and ‘Low’ packs a punch, and things wrap up with a one-take no-dubs romp through old chestnut ‘Come Together’. Despite their potential though the band unfortunately hit the buffers that June; a great shame, as they could have been one of Bristol’s finest.