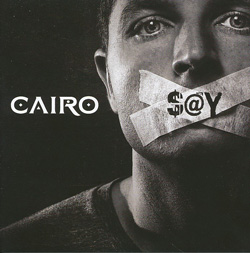 When Touchstone’s vocalist Kim Seviour announced her illness and retirement it looked like the end of what had been a great band. However, following her farewell gig in November 2015, at which founder member Rob Cottingham also bowed out, the band have recruited a new vocalist and have an album scheduled for release in the not-too-distant future. Cottingham, in the meantime, set about creating a new band, Cairo. This innovative outfit features vocalist Rachel Hill from Nanburn (the band formed by former Touchstone bassist Jonah Sutch who brokered the introductions), virtuoso progressive guitarist James Hards (who started out by as a child by playing ‘Smoke On The Water’ and rapidly progressed to having a solo album to his name), journeyman bassist Paul Stocker (an old friend of Cottingham’s) and Graham Brown, a versatile and multi-talented instrumentalist on drums, with Cottingham of course covering keyboards and vocals.

The fruits of their labours are Touchstone and then some. ‘Progressive metal’ – the tag they probably won’t escape – is a pretty broad church, and ‘$@y’ covers a variety of bases both musically and lyrically, and while the lightest moments are almost pure pop the heaviest sections are as in-your-face as they come. It’s a bit of a slow starter, though: the brief opening instrumental ‘Cairo’ gives ways to a spoken word piece (‘Shadow’s Return Prologue’) followed by the petite ‘n’ proggy ‘Shadows Return’. Hill doesn’t even step up to the mic until the sassy fourth track ‘Wiped Out’ puts in an appearance, although her performance on this cut and the layered ‘Random Acts Of Kindness Part I’ ably demonstrate why she got the job. For my money, though, top honours go to the heavier yet unpredictable ‘Nothing To Prove’ and its instrumental counterpart ‘Nothing To Prove Reprise’, and the haunting ‘Katrina’; an older song that Cottingham dusted down around the tenth anniversary of the hurricane that devastated the southern states of America, ‘Katrina’ allows him to say his piece about how the US government and the élite failed the poorer parts of their own country. A nice twist turns the chorus line into an almost Southern gospel tune.

‘$@y’ is a fabulous debut; can’t wait to see how they follow it up.