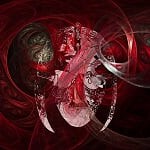 If you ever wonder why there’s been such an explosion in the post-NWOBHM genre Warrior’s vocalist Ed Halliday nails it in the title track of Warrior’s first full album of new material: “metal warriors from the past we’re sent, this invasion was imminent…” Warrior reformed at Brofest 2014 and for many were the event’s highlight, and now features former Warriors Dave Dawson and Ed Halliday (guitars and vocals respectively) alongside with guitarist Gwaether Bloom, bassist Duncan Emmerson and drummer Elliot Sneddon. The band did reveal a taste of what was to come with their ‘Oblivion’ and ‘For London Only’ teasers; however, with ‘Invasion Imminent’ they’ve answered the question ‘was there any unfinished business back in the day?’ with an emphatic and rebellious ‘yes’. Featuring eleven wholly new songs, ‘Invasion Imminent’ is a prime slice of British metal, traditional in feel but contemporary in outlook, and is an album which shows that old dogs can not only learn new tricks, but can show the young pups a thing or two in the process.

Following ‘Metal Fatigue’ (a beautifully played piano/synth piece which deserves to be developed into a full song in its own right) ‘Trojan Horse’ grabs your attention by the scuff of its neck and gives it a damn good shake. Showcased on ‘For London Only’ ‘…Horse’, with its relentless riff and kick-ass solo is the musical equivalent of ADHD and deserves to be the band’s live opener for years to come. Keeping the heat up, ‘Second Chance’ follows on, fast and furious, before the album allows some breathing space. It’s light and shade in equal measure, but if you want some highlights there’s the exciting and self-explanatory ‘Rise Of the Warriors’, slower, heavier and more in-your-face with an intricate split solo from Bloom and Dawson; the Saxon-esque ‘Who Will Win’ which veers into Biff’s ‘Motorcycle Man’ territory and features guitar histrionics to die for; and the diabolically-sounding ‘Black Middens’, a heads-down stomper in the Sabbath style which was actually inspired by a Sunday afternoon stroll Dawson took near the mouth of the Tyne where the rocks of this name wrecked many a ship in years gone by. But for me it’s the title track that takes all the honours, a true metal call-to-arms with a chorus that deserves to be shouted loud ‘n’ proud at every opportunity.

If the heads-held-high defiance may appear a little stilted coming from people – like me – generally in their mid-fifties it illustrates the true passion for metal that runs deep, an unbreakable bond that seemingly cannot be broken. ‘Metal Is Forever’, Primal Fear once decreed, and bands like Warrior are the living proof. ‘Invasion Imminent’ will be available as a download from all usual sources from 14 April. Go on, you know you want to…