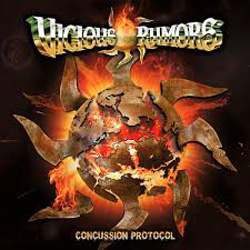 So, if you’ve got a massive asteroid heading towards the Earth, who’re you gonna call? Vicious Rumors, that’s who. For their twelfth studio album the Bay Area’s metal wrecking ball have crafted an album based on the premise that the planet is facing a disaster the likes of which humankind has never before known, but instead of sticking Bruce Willis in a rocket to save the day the storyline behind ‘Concussion Protocol’ focuses more on the breakdown of society as the human race turns on itself prior to the advent of a new Ice Age. Pretty, it’s not, and as you wouldn’t expect the soundtrack to such a storyline to be all ballads and fluff ‘Concussion Protocol’ is pretty much a dystopian battering ram. Concept aside, what you’ve got here is yet another ruthless onslaught from the Vicious Rumors arsenal. Formed by guitarist Geoff Thorpe back in the early 1980s Vicious Rumors in all its incarnations have seen fads come and go, and Thorpe and his crew Nick Holleman (vocals), Thaen Rasmussen (guitars), Tilen Hudrap (bass) and Larry Howe (drums) know all there is to know about writing and delivering hard-hitting metal imbued with melody and class.

Having steadied the tiller now for 35 years or so, Thorpe is unlikely to change a winning formula and so, as you might expect, ‘Concussion Protocol’ features a clutch of undeniably metal anthems crafted and executed with all the finesse of a Swiss watch maker. It’s perhaps more considered, more disciplined than its predecessors, and while the band’s path on this album is well-trodden, it’s paved with imagination and expertise; Vicious Rumors are not a band willing to cede their hegemony to any of the many upstarts that have challenged their crown. There’s little let-up from the opening chords of the title track to the dying embers of the chuggalong riffola of ‘Life For A Life’ some fifty minutes later. If you want some highlights, the middle order of ‘Chasing The Priest’, ‘Last Of Our Kind’ and ‘1000 Years’ – handy if you’ve got the vinyl version as these three crackers constitute Side Two – take some beating. ‘Chasing The Priest’ is a four-minute speedfreak, a glorious neck-breaking chest-beater; ‘Last Of Our Kind’ takes things down a little, criss-crossing into commercial acceptability with a magnificent twin lead intro and a glorious shoutalong chorus which will no doubt be filling concert halls across the world; and ‘1000 years’ pushes the pedal all the way to the floor and lets Howe push the band forward with some frenetic drumming and a sideswipe time change at the midway point.

With ‘class’ scrawled all over it, ‘Concussion Protocol’ is yet another top drawer release from Thorpe and his crew. Is there no stopping this band?