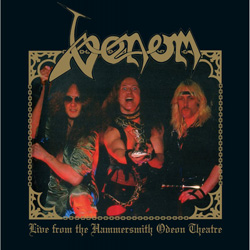 Although many didn’t see it that way at the time Venom – the Geordie three-piece who once claimed “we don’t do gigs; we do shows. It’s fucking massive!” – arrived like a breath of fresh air at the start of the Eighties. Following 1984’s Seven Dates Of Hell European tour (with Metallica in support for all but the UK date) the following year saw the band line up their World Possession Tour, their first serious lengthy outing on the road. Ten UK dates opened proceedings, but with several venues unable to accommodate the massive pyrotechnic show – aka poor ticket sales – only four gigs actually took place. The final date, on 8 October, saw Cronos, Mantas and Abaddon return to the Hammersmith Odeon once again, and again the powers that be saw fit to video the show for posterity and profit. The limited edition ‘Hell At Hammersmith’ 12” appeared before the year was out and featured ‘Witching Hour’ and the ‘Teacher’s Pet’ / ‘Poison’ medley, but by the time the promised live LP ‘Eine Kleine Nachtmusik’ appeared a year later it had been inter-cut with tracks from two nights at The Ritz in New York, meaning that the ‘Alive In ’85’ video was the only real soundtrack to that unforgettable night in London.

High Roller Records’ ‘Live From The Hammersmith Odeon Theatre’ takes the video soundtrack and makes it officially available on vinyl for the first time. There’s no doubting that for the band it was a triumphant return to the Hammersmith stage, and I remember sitting with eight or nine other spectators in the comfort of the empty Odeon balcony watching the spectacle unfold. It was, indeed, a show and, as you would expect from a Venom album, ‘Live…’ is raucous and unforgiving, a brutal bomb blast with little subtlety and lots of noise, with a tracklist which is a feast to the eyes and ears. Highlights on the night include the downtuned terror of ‘Buried Alive’, crowd-pleasing B-side ‘In Nomine Satanas’, the glowering ‘Satanarchist’ and ‘Welcome To Hell’, the title track of the album that started it all.

Despite some loving remastering the limitations of the source tape mean that the sound can be a little thin at times, and the audience has been enhanced to ridiculous levels: there’s no way the Odeon’s stalls could ever make that much impact! At 56 minutes or thereabouts it’s a long album but not the entire show: although the LP features the full video soundtrack, ‘Die Hard’, the aforementioned ‘Teacher’s Pet’ / ‘Poison’ and ‘Leave Me In Hell’ were all aired on the night (it’s not difficult to spot the cuts), but now appear to be MIA. But it’s still an historic record Venom at their best. Not long after, Mantas quit the band he’d formed and things would never be quite the same again.