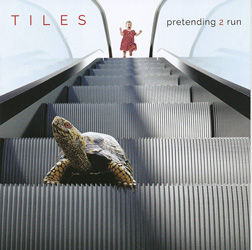 Back with a vengeance? You betcha! Some eight years after the release of their previous studio outing ‘Fly Paper’ Mike Portnoy’s favourite band (or one of them, at least) have returned with an ambitious – or maybe audacious – hour-and-a- half’s worth of exciting and inspiring progressive music. Sadly missed, the Detroit quartet punctuated their length absence with a couple of live albums ‘Off The Floor 01’ and ‘Off The Floor 02’ in 2012 and 2014 respectively, but a new studio release has been long awaited and is well overdue: welcome, then, to ‘Pretending 2 Run’.

Maybe it’s a sign that the band – Chris Herin (guitar), Jeff Whittle (bass), Paul Rarick (vocals) and Mark Evans (drums) – have been straining at the leash for some time, but ‘Pretending 2 Run’ is a true monster of an offering. Apparently the tale of a man disillusioned by betrayal, the album weaves its story over two at times challenging but ultimately rewarding discs which ebb and flow between the beautiful and the belligerent, sometimes wrong-footing the listener in the process. Sprawling, epic compositions rub shoulders with short instrumental bridges; searing guitar solos brusquely intrude in quieter songs; aggressive riffs punch holes in tranquil passages. Everything is planned and executed with great articulation, yet often little can be anticipated as the songs unveil their secrets in a quite unexpected fashion. For younger fans, if you ever wondered how the older generation felt when hearing ‘Dark Side Of The Moon’ for the first time, a spin of ‘Pretending 2 Run’ should help you capture the feeling.

It’s not unusual for the guys in Tiles to invite a guest or two into the studio. This time around, among many others, Kim Mitchell is back to add a slice of lead guitar to ‘Shelter In Place’, Ian Anderson pops on flute – naturally – and Portnoy, who, championed the band back at the time of their third album ‘Presents Of Mind’ in 1999 and invited them to tour with Dream Theater, sits in on the drum stool for both ‘Stonewall’ and ‘Fait Accompli’ where he’s joined by his teenage son Max. And it’s certainly worth mentioning that Mike Stern’s guitar solo in ‘The Disappearing Floor’ is in a class of its own.

The very embodiment of class, ‘Pretending 2 Run’ is topped ‘n’ tailed by a lush sound courtesy of long-term collaborator and producer extraordinaire Terry Brown, and exquisite and enigmatic artwork by Hugh Syme.