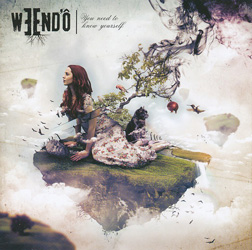 THIS WEEK I'M LISTENING TO...WEEND’Ô You Need To Know Yourself (Sonicbond)

Certain albums come with their own almost indefinable qualities, and one such is Weend’ô’s debut release. Possessing an innate beauty and seeming fragility almost unsurpassed in the contemporary progressive scene ‘You Need To Know Yourself’ is a hugely impressive body of work.

Following the release of 2018’s excellent ‘Time Of Awakening’ CD Sonicbond have once more made available Weend’ô’s first album, originally released in 2012 but re-issued here in its 2014 remixed form. Despite this being the band’s first outing it’s a hugely proficient album, equally as good as last year’s follow-up; if you’ve already come across this French progressive metal four-piece or their releases you’ll appreciate that this is a band of no mean ability, and its apparent that they knew how to write and perform songs of breath-taking splendour and majesty long before they ventured into the studio. If you don’t already know them then you’re in for a treat.

Dominated by the lush vocals of singer and keyboard player Laetitia Chaudemanche which float over epic compositions (perhaps none moreso than in the title track where she gives full rein to her exquisitely emotive voice) the album is a progressive fan’s dream, with songs like ‘Betrayal’ stretching out over nine-and-a-half minutes while the piano-driven ‘The Soulmate’ offers a more direct, stripped down view of the band. The instrumentalists – guitarist Térence Nguyen Van, bassist Maxime Rami and drummer Nathanaël Buis – all get their own chance to shine as, for example, the bass and drum breakdown of ‘Deadline’ or the fabulous guitar work-out that closes ‘Welcome In My Mind’ ably demonstrate. Everything however works within the context of the songs – nothing is extraneous or out of place and everything is refined to perfection. The opening two cuts – single versions of ‘Dark Element’ and ‘Experience’ – are fascinating in themselves; I can’t be the only person who hates edits with a vengeance, but in both cases the shorter versions have reduced the songs to their fundamental elements and in doing so present them in a much tighter, more focussed format. The original versions, which appear in reversed order at the end of the album, then unveil themselves gracefully over their enlarged timeframe, revealing themselves in their full opulence.

A magnificent album, highly worthy of another spell in the spotlight.