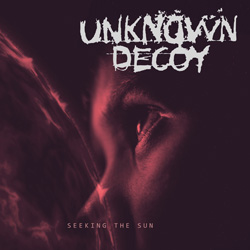 Driven by a seemingly insatiable urge to create power-pop with a lasting legacy, Unknown Decoy bop till they drop through their debut EP release, a five-track outing called ‘Seeking The Sun’ (which I guess is pretty futile a lot of the time in Scandinavia). Crafted from a shopful of infectious grooves and heads-down no-nonsense riffs, the young three-piece from Finland have thrown every influence they have in a pot, topped it off with their own enthusiasm and come up with an almost unique blend of heavy, funky, hot-to-trot, singalong crowd-pleasers.

Doing their utmost to avoid being pigeon-holed, Aaron Viitanen (vocals and bass), Vilho Polamo (guitars and backing vocals) and Saku Taittonen (drums and backing vocals) certainly don’t go out of their way to court the mainstream vote. ‘The Men’ with its almost hypnotic, repetitive melody, could have come from the catalogue of Jane’s Addiction, while ‘Test Animal’ bounces around with a choppy riff which wouldn’t be out of place smack in the middle of a mosh pit while coming across as a son of Seattle and flaunting a punk-laden chorus to die for. ‘Praise The Sun’, despite its deep, booming intro soon becomes a poppy, toe-tapper, and ‘Flash’ boasts a riff and a guitar sound that would bring a smile to Tony Iommi’s face until, that is, the ferocious guitar solo is rudely interrupted by an accordion passage which breaks into the doom-laden dirge (and if that sounds bizarre, even more bizarre is the fact that it works!). And finally there’s ‘Davaj!’, a song which details the trials and tribulations of their van. It’s a page torn firmly from the classic rock songbook with a neat key change towards the end and, as a bonus, the band have worked a Lada into their lyrics!

There’s much to commend here and little to dislike, and with the Unknown Decoy’s contagious happy-go-lucky attitude permeating the songs ‘Seeking The Sun’ is guaranteed to put a smile on your face. The perfect antidote to a grey day.