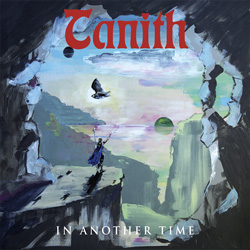 THIS WEEK I'M LISTENING TO...TANITH In Another Time (Metal Blade)

Tanith take their name from Niké Arrighi’s character in the 1968 film ‘The Devil Rides Out’, a Hammer horror which scared me to death back when I was way too young to watch it. And although there’s nothing particularly scary going on here, the link to Satan via guitarist (and, here, vocalist as well) Russ Tippins provides a neat link. Tippins has never had a problem writing beyond the confines of his day job in Satan as his albums with his self-titled rhythm and blues band have ably proved, but with ‘In Another Time’ he and his Tanith bandmates Cindy Maynard (bass and vocals), Charles Newton (guitars) and Keith Robinson (drums) have turned in an eclectic set of exciting retro Seventies rock.

Opener and debut single ‘Citadel (Galantia Pt.1)’ – a second single ‘Under the Stars’ is scheduled – pretty much sets the scene for much of the album. There are obvious NWOBHM licks, and when the solo cuts in it’s very reminiscent of Blue Öyster Cult. In fact, if you want a very rough point of reference, Long Island’s finest wouldn’t be a bad place to start. The songs are well thought out, rarely forceful but always sublime, and work on many levels, aided by some cleverly constructed lyrics and interesting progressions. The icing on the cake is the vocal interplay between Maynard and Tippins, their voices working dynamically together as they trade verses or lines, adding further depth to an already thought-provoking and immensely evocative collection of songs.

The album’s title can be interpreted in a number of ways, just like its multi-faceted songs, but it’s ‘Cassini’s Deadly Plunge’ which takes top honours for me, the guitars and voices pushing the boundaries while Maynard and Robinson keep things on the straight and narrow. ‘Under the Stars’ boasts a bounding riff and mid-section time change and could easily been issued as a self-pressed single in 1979, while the epic ‘Dionysius’ is as grandiose as they come. An outrageously good debut, ‘In Another Time’ is forty-four minutes of pure magic.