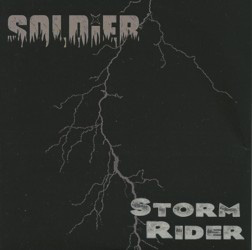 If this is Soldier’s last stand – the creative partnership of Ian Dick and Richard Frost are currently working on another project – it’s a firefight of epic proportions. Aware that their previous album ‘Defiant’ might have taken the band a tad too far from their core audience – hey, but a band needs to evolve, y’know? – Soldier are demobbing themselves with a glorious three-track EP, available from their website.

The first two cuts – the title track and ‘R.N.R’ – are amongst the most easily accessible songs the band have ever written, catchy but blessed with razor-edged riffs and solos to die for. It’s a real shame when ‘Storm Rider’ chases the fade as you’re just willing that play-out solo to go on and on and on, while the slower-paced, longer and could-have-been-a-single-back-in-the-day ‘R.N.R’ is anthemic and exciting. Meanwhile, the epic third track ‘Little Big Horn’ cleverly weaves a Native American groove in its retelling of the battle of 1876. Astute historical dramas like this have become a healthy part of the band’s arsenal (like ‘Defiant’’s heroic ‘Conquistador’) and display an ability to create exceptionally clever compositions with meaningful lyrical content and while having a blast in the studio. This one track is worth the cost of the EP alone. Trust me on this.

Still, nothing lasts forever, and with a brace of exciting new and cupboard-clearing albums to their name it looks like it’s time for the NWOBHM stalwarts to stand down. Richard Frost, Ian Dick, Miles Goodman, Steve Barlow and Tim Churchman, we salute you!

To pick up a copy of ‘Storm Rider’, go to www.soldiernwobhm.com