It’s quite true, as the old adage goes, that you never really miss something until it’s gone, and over the years there’s been a huge – god-shaped? – void in the progressive metal scene where Psychotic Waltz once stood. Four albums issued between 1990 and 1996 gave the band both stature and an enduring legacy, and then, well, nothing, really, save for a smattering of live dates here and there since 2011. Fast-forward from 1996’s ‘Mosquito’, and the Californian quintet are back in the racks once more with ‘The God-Shaped Void’, a ten-track monster of an album ably executed by the Rock / McAlpin / Evans / Leggio / Graves line-up responsible for the band’s first three albums. 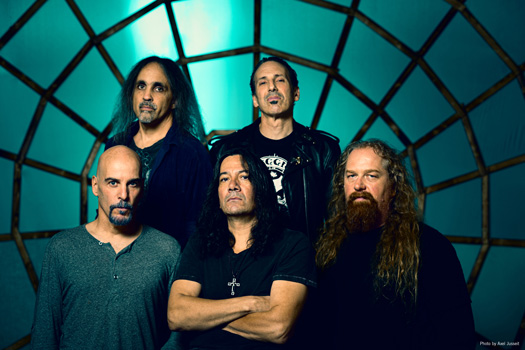 ‘The God-Shaped Void’ has been a long time in the making – the 2011 reformation seems to have been the catalyst that led to it finally to an album’s worth of material coming to the boil and being ready for release now– but the very best of things are most definitely worth the wait and after twenty-four years Psychotic Waltz have delivered what could arguably be the album that defines their career. Fifty-plus minutes see the band unveil an Aladdin’s Cave of extraordinary songs, all of which are complex without being unnecessary complicated and accessible without selling their soul to commercial acceptance. Although it would be unwise and unfair to single out anyone from a band of such rare talent, frontman Devon Graves’ vocals on songs like ‘All The Bad Men’ – a nodding chugger which doesn’t sound a million miles from ‘Empire’-era Queensrÿche – and its conjoined twin ‘We Are The Fallen’, and stall-setting opener ‘Devils And Angels’ range from the huge to the sublime. Meanwhile, Dan Rock’s and Brian McAlpin’s guitars are razor sharp and set to stun, and, backing everything up, the rhythm section of bassist Ward Evans and drummer Norm Leggio mark their territory prominently while never overplaying their hands. Highlights come thick ‘n’ fast, but the haunting (and lyrically enchanting ) ‘Demystified’ takes some beating.

Having delivered an album of such treasures, it’s little surprise that the band’s biography refers to them as “America’s foremost progressive metal outfit,” and it would be foolhardy to challenge such a blatant statement of fact. When critics tally up their end of year Top Tens come December, don’t be surprised to see ‘The God-Shaped Void’ figuring prominently across the board. Note, by the way, that there’s a bonus track, ‘Season Of The Swarm’, available on certain formats of the album.