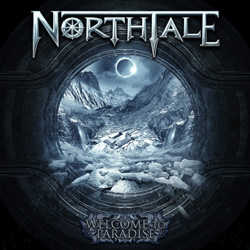 A good power metal album should be like a Pixar movie. It should be well crafted, uplifting, gritty and powerful, but still able to tug a heartstring or two and yet leave you with a smile on your face. And although it won’t change the world it should possess florid soloing, anthemic, soul-stirring vocals and huge soundscapes to give you a bit of a buzz. Both Northtale’s ‘Welcome To Paradise’ and Twilight Zone’s ‘Dawn Of the Dragonstar’ fall into this category, although the two ably demonstrate that even as a sub-genre power metal is a broad church (or maybe that should be a wide forest).

Fairly new to the scene, Northtale came into being towards the end of 2017. Udo Dirkschneider guitarist Bill Hudson and Twilight Force vocalist Christian Eriksson hooked up at a festival where they were playing with their respective bands and immediately hit it off. As both were in touch with drummer Patrick Johansson about the possibility of collaborating, the core of the band seemingly fell into place. Eriksson introduced bassist colleague Mikael Planefeldt while Hicks invited keyboard player Jimmy Pitts along and Northtale was born: welcome to Paradise indeed. The band’s debut is everything you’d expect from a group of seasoned professionals with hearts and minds imbued with enthusiasm (“we want to bring back the amazing golden years of power metal,” notes Hudson in their biography) and it flows like a swollen river, unstoppable and incorrigible yet effortlessly sublime at the same time. It starts strongly with its drummer-slaying title track and barely lets up, serving up the best part of an hour of finger-shredding guitar work and inspirational vocals. If there’s a criticism, it’s that the album could do with a bit of light and shade as the songs never stray too far from their middle ground template, although ‘Way Of The Light’ is a track to make you hoist your lighter in the air, and if you don’t throw your head back and sing along to future Eurometal classic ‘Everyone’s A Star’ you’ve probably got a severe case of lumbago. And I could listen to ‘If Angels Are Real’ all day long. 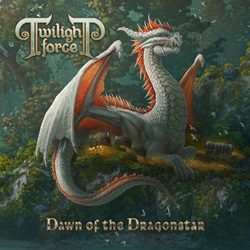 Meanwhile, hot on ‘Welcome To Paradise’’s heels comes the latest offering from Twilight Force, featuring their new vocalist Allyon (Alessandro Conti), who’s stepped ably into the flowing robes of Chrileon (the aforementioned Christian Eriksson, to his mum and dad). Twilight Force go the whole nine yards with stage names and costumes, and have emerged from the woods, swords in hand, for their third outing ‘Dawn Of The Dragonstar’. Theirs is a more ethereal take on power metal than Northtale’s, with a quest, huge symphonic intros and evocative, less metal instruments like the cembalo (harpsichord) and lute. Each of the album’s ten cuts are more warrior than song, each a legend in its own right. It’s larger-than-life, certainly, although perhaps more derivative than Northtale’s outing (there’s a fair chance you’ll work out how the songs are going to pan out before they pant their dying breath) but, like Northtale, the Swedes seem bent on reconnecting the power metal genre to the mainstream once more, proclaiming aloud ‘Long Live The King’ and praising (personal fave) ‘Queen Of Eternity’. No such album is complete without the epic of all epics, and although ‘With The Light Of A Thousand Suns’ puts in a brave challenge for the prize the colossal twelve-and-a-half minute album closer ‘Blade Of Immortal Steel’ cuts down all challengers as it twists and turns like the path to Mordor to its inevitable stirring climax. Masterful!