Coming at things from an explosive angle, and refusing to bow to convention, progressive cyber-metallers Mytra are back in business with a somewhat belated – but no less exciting – successor to their 2014 debut ‘Beta’. An articulate album, almost arrogant in its self-belief, ‘Logos’ blazes a trail of exciting and frenetic electronic-fused metal across a sci-fi, near-dystopian universe, crafted by a Hungarian quintet who are happy to defy both expectation and definition. “We don’t want to make anyone get lost in the maze of over-complicated genre definitions, so it’s up to each of you to call this material what you feel like it is,” they claim in their biography, which is a clever way of saying that this is a genre-bending album with guitars and synths either working in harmony or turning on each other in a vicious dog-fight, depending on the nature of the song. From the opening chords of ‘Exogen’ to the instrumental ‘Reditus’ that wraps things up, ‘Logos’ is an ambitious and dynamic offering – part Euro metal, part trance, all Mytra. 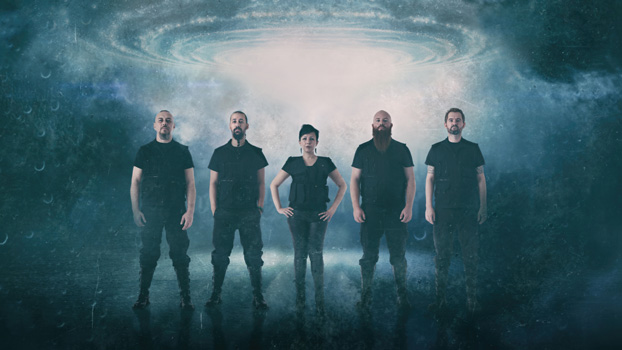 There have been a couple of changes to the band long the way, with István Bidlek replacing guitarist Gábor Nyerják and Tamás Tóth on drums, following the untimely death of László Zabari in October 2018, aged just 42, but the core of vocalist / keyboard player Viktória Hocza, cookie monster vocalist / guitarist Róbert Hocza and bassist Roland Lovas have kept the (space) ship steady and created a volatile album which works on many levels. You wanna dance? Then let’s dance. You wanna headbang like the maddest mofo in town? Crank it up and knock yourself out. Songs like ‘Twelfth’, ‘Initium’ and ‘N.I.R.A.’ are heavy as a bucket of spanners and possess an infectious, driving beat and a tenacity that’s impossible to deny, reminiscent of Fear Factory’s greatest moments, while the contrasting vocals of the Hoczas – occasionally pushed through a vocoder – both complement each other and add further to the creation of the futuristic realm Mytra inhabit. An excellent release from a band with overwhelming commitment and vision, Mytra are a name to keep an eye on. And I’m guessing they’re great live, too...