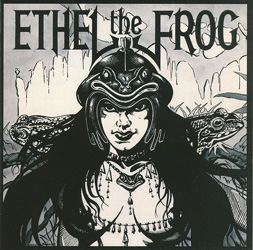 This little blast from the past has been knocking around for a while now – High Roller re-issued it on vinyl and CD last September – but it’s been a regular visitor to the turntable lately so worth a mention. Originally released in 1980 on EMI, Cherry Red’s British Steel imprint made a CD version of it available some seventeen years later, but it has been missing in action for some time and is an interesting and curious little album.

Ethel The Frog were formed in Hull in 1975 by Paul Tognola (guitar), Doug Sheppard (vocals & guitar), Terry Hopkinson (bass) and Paul Conyers (drums) – just after the four had left school at 16 – and took their name from the Monty Python spoof current affairs programme which broke the story of infamous gangsters the Piranha brothers. Unable to get a deal in the second half of the spittle-strewn Seventies, in November 1978 they released a single on their own Best Records label. Recorded (inevitably) at Fairview (well, it was local to them, as well as being the place to go) and pressed with a run of just five hundred, the 7” coupled a cover of ‘Eleanor Rigby’ with their own ‘Whatever Happened To Love’. They’d already sent EMI some material before Neal Kay tapped them up for a track for his upcoming ‘Metal For Muthas’ compilation and by the time the album had been released in February 1980 (boasting Ethel The Frog’s hugely energetic ‘Fight Back’ as the opening cut on side two) the suits at EMI had already taken some notice and listened to the material they’d been sitting on. Instead of booking studio time though EMI issued ten of the band’s original recordings (produced by Sheppard between 1975 and 1979) on one self-titled LP.

‘Ethel The Frog’ was preceded in February 1980 by a re-issue of ‘Eleanor Rigby’ (this time flipped by ‘Fight Back’) with the album following in May, but to all intents and purposes the band had called it a day by then; and although they did limp on until a final gig in early 1981 (after which the two Pauls formed Salem) there was little, if any, cause for EMI to spend money on promotion and it made its way to bargain bins quite quickly – mine came from Woolies for 99p. It’s an interesting album though, but without an outside ear to focus them the band seemed to throw every style they could think of at the wall to see what stuck, so some tracks are pure Seventies rock while others are certainly NWOBHM. ‘Apple Of Your Eye’, for example, is a joyous, bouncy rocker with dual Iron Maiden guitar runs before Harris’s boys had even written them. ‘Staying On My Mind’ is a boppy little boogie which could have come off any good Status Quo album, whereas ‘Jailbait’ and ‘You Need Wheels’ could have come off any bad Status Quo album. ‘Fight Back’ is about as aggressive and as NWOBHM as they got (meaning, by the way, that theirs is the only non-exclusive cut on ‘Metal For Muthas’), with ‘Don’t Do It’ cut from the same cloth. ‘Eleanor Rigby’ is ‘Eleanor Rigby’, and the album runs off with that first B-side, ‘Whatever Happened To Love’, and the lengthy elegy ‘Fire Bird’.