Founded by frontwoman Madeleine – hence the band’s name – Liljestam and guitarist (and part-time Cookie Monster) Rikard Ekberg in 2012, this Swedish five-piece MFV band already have a number of releases under their belts and ooze talent from every pore, so why they’re not exactly a household name is anyone’s guess. Still, following on from last year’s second album (and first for Black Lodge) ‘Until The End’ comes ‘All Shall Burn’, a hugely enjoyable five-track stopgap EP. 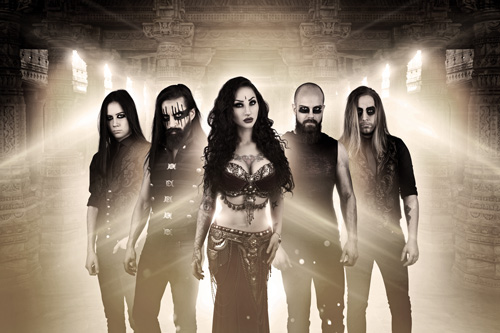 Eleine (also featuring guitarist Ludwig Dante and a relatively new rhythm section of bassist Anton Helgesson and drummer Jasper Sunnhagen) describe themselves as “seductive, stylish and monumental,” and there is certainly something about them that makes you sit up and listen. Of the five cuts on offer it’s the opening pair that demand the most attention. First cut ‘Enemies’ kicks off with an almighty bang before a sweeping symphonic soundscape rushes things along at a breakneck pace. The title track is perhaps more commercial, mid-paced and gloriously orchestrated, with one foot in the Evanescence camp and the other furiously stamping out its own territory while Liljestam belts her lungs out as though her life depends upon it. Symphonic versions of ‘Hell Moon (We Shall Never Die)’ – originally from ‘Until The End’ – and ‘All Shall Burn’ again throw the spotlight on Liljestam’s amazing voice, and this reworking of the title track also highlights Ekberg’s not inconsiderable vocal prowess. Making up the numbers is a take on Rammstein’s ‘Mein Herz Brennt’: a brave choice, certainly, but the band play it too straight and Liljestam’s presence here is remarkably limited, turning their rendition into a tidy (and heavy) but unfortunately largely unexceptional cover-by-numbers. That aside, based on the evidence here album number three should be a cracker!