It’s mind-boggling to think that 2020 and a new album, ‘Coat Of Arms’, celebrate the fiftieth anniversary of the release of Wishbone Ash’s self-titled album, an auspicious debut which appeared just before Christmas and which broke into the UK Top 30 as the New Year’s hangovers were subsiding. Fifty years, several line-up changes, and legal arguments later, Wishbone Ash are back with their twenty-fifth studio and their first since 2014’s ‘Blue Horizon’. Now featuring guitarist Mark Abrahams alongside founder member, guitarist and vocalist Andy Powell and the enduring rhythm section of bassist Bob Skeat and drummer Joe Crabtree, the band are hungry once more, and anyone who’s seen them on tour recently will testify to their rude health and the almost intuitive nature of their performances. This has carried over to ‘Coat Of Arms’, an hour’s worth of material cut from the very cloth the band used to create the albums that justifiably made their name. 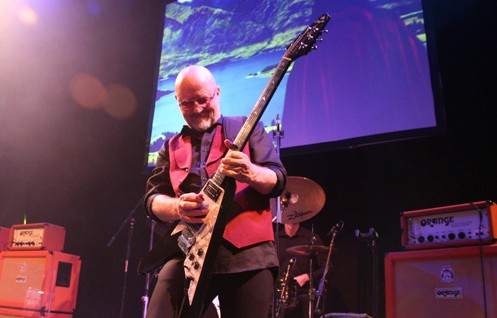 Perhaps commitment is the watchword here. With half a century under his belt Powell would have no desire to tarnish his band’s legacy, and as the leader of the gang he has ensured that ‘Coat Of Arms’ is a suitable re-imagining of what he and his former bandmates set out to achieve all those years ago. Songs like ‘Empty Man’ with its reggae style licks and haunting refrain, the elegiac ‘It’s Only You I See’, obtuse lead single ‘We Stand As One’ and biographical fan-tribute ‘Back In The Day’ are worthy additions to the band’s canon without repeating the many licks ‘n’ tricks that have preceded them over the years. Maybe the biggest surprise though is that Abrahams’ songwriting contributions mirror so precisely the spirit of Wishbone Ash that he seemingly could have been there at the start – even though he probably wasn’t even born until around the time of ‘Strange Affair’! A long-time fan of the band long before he had their name on his flight cases, Abrahams has slotted in beautifully, and his contributions are both understated and immense. ‘Coat Of Arms’ continues in the tradition of slick twin guitar runs, beautifully crafted songs and some of the finest playing you’ll hear this year; what more do you need from a band?