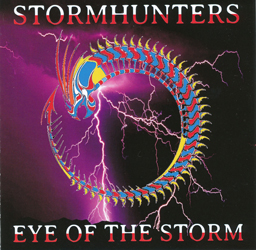 THIS WEEK I’M LISTENING TO...STORMHUNTERS Eye Of The Storm (SMC)

Taking their name from the core members’ previous bands and featuring ex-Stormtrooper guitarist Bob Starling and former Hunted frontman Andy Milson, in ‘Eye Of The Storm’ Stormhunters (see what they did there?) have delivered an exciting and extremely deliberate hard rock album. With a lengthy track record in their previous outfits they both know the difference between a good song and a great song, and along with their own proficiency their calling card is melody. Aided by keyboard player John Genge on a number of tracks and with Starling taking care of bass and programming duties, Starling and Milson certainly haven’t lost sight of the need to create music that’s both heavy and hummable at the same time.

The album has had a fairly lengthy gestation period, but the time the pair have taken to bring ‘Eye Of The Storm’ to the boil has well and truly paid off. It’s a beautifully crafted body of work, and songs like ‘Overload’ and ‘New Horizons’ exhibit the maturity and shrewdness that you’d expect from a longstanding outfit rather than a relatively new band. That said, both musicians bring many years’ experience to the table, and have both have been responsible for some rather tasty material in the past. It’s also interesting that despite the fluidity of Starling’s playing a number of the songs give Genge his own space to shine – ‘Long Way Down’ being a good case in point. 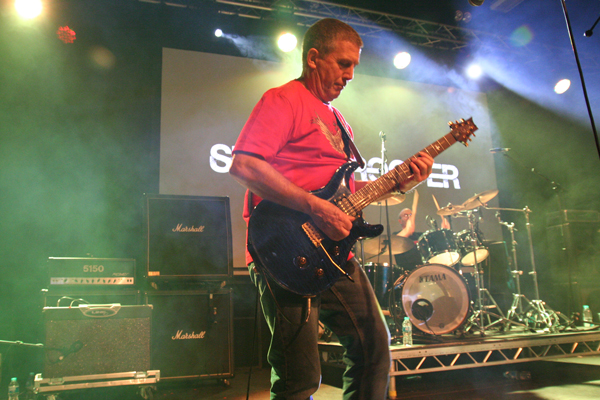 Bob Starling with Stormtrooper at Brofest 2017

Overall the sound is more Hunted than Stormtrooper (although they were never megastars the Bristol-based Hunted were responsible for some chic melodic rock songs back in the early Nineties when such things were wholly unfashionable), yet some of the progressive elements of Starling’s earlier outfit do make themselves known from time to time, most obviously in ‘Holding On’ and also in ‘Take The Fall’.

Things come to a more than satisfactory conclusion with the drum-driven hard rockin’ album closer ‘You Won’t Take Me Down’ but, when all’s said and done, after multiple plays it’s still the opening cut ‘Lost’ with its enormously memorable melody and some exemplary double-tracked guitar work from Starling (and some lovely keyboard work from Genge, too) that continues to take the honours for me. What Starling and Milsom need to do now is get themselves a drummer and bassist and get on the road where they can showcase this excellent material to an appreciative live audience.