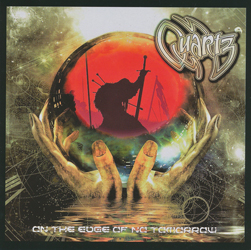 THIS WEEK I’M LISTENING TO...QUARTZ On The Edge Of No Tomorrow (Hear No Evil)

In one of those amazing twists of synchronicity, ‘On The Edge Of No Tomorrow’ is set for release on 20 May – 45 years to the very day that Quartz’s self-titled debut first appeared in the shops. And this nod to the past – coincidental though it might be – is quite apt, given that the album’s foundations and inspiration came from demos recorded by founder member Geoff Nicholls. The guitarist/keyboard player passed away in 2017, telling the band not to leave the material on the shelf, and guitarist Mick Hopkins then began painstakingly working on the songs. A clutch of new material was then written and recorded, resulting in an hour’s worth of exciting new material for the band to showcase.

Given that Quartz still features three of the original members, with bassist Derek Arnold and drummer Malcolm Cope alongside Hopkins, as well as the contributions from Nicholls – original vocalist Mike ‘Taffy’ Taylor died in 2016 – it’s no real surprise that the album remains faithful to the spirit of ‘Quartz’ (an album which could easily been seen as the archetypal NWOBHM release even though it pre-dates the genre) and its successors. Fads come and fads go, but Quartz have never strayed from their path and should be applauded for it. Riff-driven and born of Birmingham steel, the fourteen tracks on offer personify the best of classic British metal, from the sparky ‘Angels At the Crossroads’ (one of the songs which keeps Nicholls’ original vocals) to the downbeat and atmospheric Sabbath-esque ‘World Of Illusion’, featuring vocalist Geoff Bate. But that’s not to say that this is an album rooted in the past. Traditional metal is an evergreen beast, as strong now as it ever was, and ‘On The Edge Of No Tomorrow’ is as fine an offering as you’re likely to hear. The anthemic ‘Night Of The Living Dead’ (another of six songs to feature Geoff Bate) and the David Garner-fronted ‘Babylon Is Burning’ – Garner recorded three tracks for the album before dropping out of the picture – show that old dogs don’t need to learn new tricks to lead the pack.

Inhabiting a similar world as Black Sabbath, Quartz’s material still at times displays odd traces of joint DNA, and as if to finalise this loose association Tony Martin pops up to sing ‘Evil Lies’, a song which sounds not unlike Sabbath’s ‘Sign Of The Southern Cross’ at first until it takes flight and careers down the metal highway with the pedal pressed firmly to the metal. Quartz may not be the most prolific band in metaldom, but when they do have something to say it’s always worth sitting up and paying attention. Trust me on this.