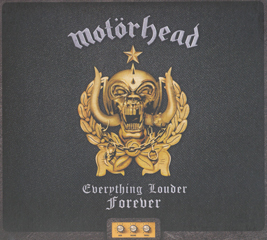 There are compilations, and there are compilations. In general, career retrospectives tend to be sketchy and depend upon what’s available for license, but ‘Everything Louder Forever’ does a very good job of rounding up the highlights of thirty-eight years of Motörheadbanging on record, from their 1977 self-titled calling card to ‘Choking On Your Screams’ from 2015’s ‘Bad Magic’. Obviously there are a number of tracks which had booked their places long before the album was conceived – it wouldn’t be Motörhead without ‘Overkill’, ‘Bomber’ and ‘Ace Of Spades’, after all – but the compilers have gone out of their way to co-opt some lesser-known but equally valid cuts into the running order. As a result, the likes of ‘Snaggletooth’ (itself a compilation track from 1984’s ‘No Remorse’), the B-side ‘Dirty Love’ and ‘The Game’ from the ‘WWF The Music, Vol.5’ album all make the cut. 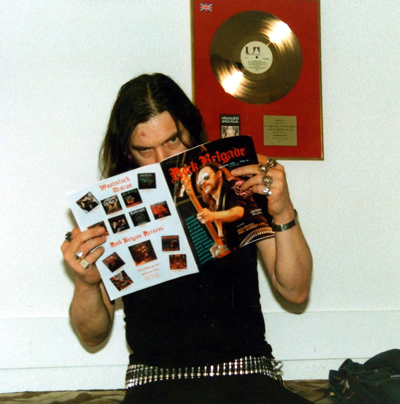 Lemmy at the GWR offices, August 1987

The double CD / quadruple LP set serves up a whopping forty-two tracks, so there is pretty much something for everyone. I wouldn’t call myself a Motörhexpert, but as far as I can see only two albums have been omitted from this essential musical history lesson. There’s nothing from 1987’s ‘Rock ‘N’ Roll’, although the ‘Eat The Rich’ single’s B-sides ‘Cradle To The Grave’ and ‘Just ’Cos You Got the Power’ sort of represent that particular LP. The 2002 release ‘Hammered’ though is conspicuous by its absence; maybe its omission is contractual, as surely ‘Walk A Crooked Mile’ could have merited inclusion. Meanwhile, I’ve personally never been convinced by Messrs Kilmister, Campbell and Dee’s cover of ‘God Save The Queen’; there are surely ten better tracks on ‘March Or Die’ than the Ozzy duet ‘I Ain’t No Nice Guy’; and the subtitle ‘the definitive collection of their loudest songs ever’ is belied by ‘1916’, which may be called many things – interesting, atmospheric, evocative – but hardly loud. These are minor quibbles, though, and with such a rich and extensive back catalogue like Motörhead’s it’s going to be an impossible task to keep all the people happy all the time.

Of course, all serious Motörheadbangers will have got it all before, but that’s not the point. ‘Everything Louder Forever’ is a lengthy and comprehensive collection, and there’s no ‘previously unreleased track’ to ensure the faithful have to open their wallets once more. It’s honest, and it’s compelling. It is what it is. It’s Motörhead. And it will kick your ass.