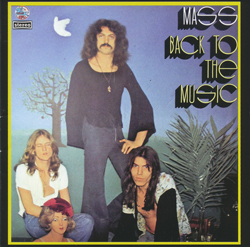 THIS WEEK I’M LISTENING TO...MASS Back To the Music (Golden Core)

I always visualise A&R guy Neudi and his Golden Core colleagues like early twentieth century Egyptologists, digging around in the Valley Of The Kings, endlessly hoping to turn up an undiscovered gem or two. Their latest Carter-like discovery is Mass’s ‘Back To The Music’, originally released in 1977. The German trio from Regensburg had begun their career as a quartet under the name Black Mass, but that and the usual Satanic twaddle which was all the rage in the Seventies didn’t endear them to the locals. Their singer’s drug addiction finally put the kibosh on things anyway, and with bassist Günther V Radny taking over vocals the band re-emerged with fewer musicians and a shorter name, recording ‘Back To The Music’ over a week in September 1976.

‘Back To The Music’ is firmly rooted in Seventies’ hard rock, right down to the drum solo in the final number ‘A B C’ (seemingly a pre-requisite for studio albums from that era and a practice that was fortunately later outlawed by the European Court of Human Rights). More rocky material like opener ‘Highway Road’ rubs shoulders with the blues (‘When I Remember’), the obligatory cover (‘Painter Man’), the pseudo-psychedelic hippy trip (‘Annabell Lee’) and the brief but atmospheric instrumental (‘Under The Sun’). But while this makes ‘Back To The Music’ sound rather stereotypical it’s actually a fascinating release for musicquarians. Here in the UK such material would be almost impossible to hear back in the day, and it’s interesting to see what was happening in Europe at the time that rock was starting to be eclipsed by punk in the domestic market.

Mass hit the buffers in the mid-Eighties but reformed in in 2017. Its predecessor, Black Mass, had actually recorded an album in April 1975 which never saw the light of day, and although the masters are MIA five of its cuts are tacked on to this re-issue of ‘Back To The Music’ as bonus tracks. To be fair, though, they are hardly essential, and go some way to proving that the devil didn’t have all the best tunes, after all.