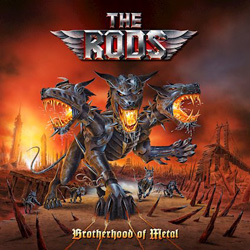 THIS WEEK I’M LISTENING TO... THE RODS Brotherhood Of Metal (SPV)

If, for whatever reason, you’re new to The Rods, skip straight to track eight – ‘1982’ – which is not only a stormer in its own right but which sets out the band’s backstory to a suitably pounding soundtrack. It’s probably not the first autobiographical metal song, but it does work remarkably well. If, on the other hand, you’re already familiar with the works of guitarist/vocalist David ‘Rock’ Feinstein, bassist Garry Bordonaro and drummer Carl Canedy, you’ll almost certainly appreciate that ‘Brotherhood Of Metal’, the band’s seventh studio album, is no less tenacious or belligerent than any of its predecessors. The New Yorkers are still the very embodiment of metal through and through – always have been, always will be – and despite the fact that it’s, what, coming on for forty years since they blazed across the UK as the support on Iron Maiden’s Beast On The Road tour, time has neither blunted their enthusiasm nor dented their heads-down, take-it-or-leave-it, don’t-give-a-toss approach.

‘Brotherhood Of Metal’ – which once again features cover art depicting the three-headed metallic dog, a most apt personification of these metal mongrels – is fifty minutes of neck-breaking riff-mongering pleasure. The epic opener and title track veers into Manowar territory (and of course principal songwriter Feinstein once played with Joey DeMaio in David Feinstein’s Thunder) but that’s no bad thing in itself, and it sets the album’s tone as a call to the faithful. After that, it’s one fist-in-the-air kick-ass anthem after another as ‘Brotherhood Of Metal’ unveils itself as arguably the band’s best album since ‘The Rods’ cranked it up way back when. ‘Louder Than Loud’, ‘Hell On Earth’ (a title borrowed from the tour that never was) and ‘Tonight We Ride’ are as hard and heavy as their titles suggest. The only weak link in this metallic firestorm is the funky ‘Party All Night’ which in my opinion should have stayed in the vaults. Despite a cracking solo from Feinstein, and the fact that it clocks in at less than three minutes, it’s too repetitive and indeed too funking long, breaking up the flow of muscle-bound monsters.

‘Awesome’ is a word hugely over-used these days, but it suits ‘Brotherhood Of Metal’ down to the ground. And bear in mind that the vinyl version offers up a bonus track, a re-recording of ‘Crank It Up’ which originally appeared on ‘Rock Hard’ way back in 1980.