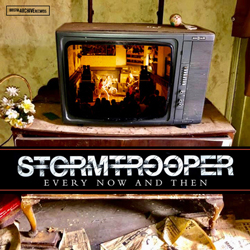 If you were at Brofest in 2017 you would have seen the triumphant return of Stormtrooper, one of that year’s festival highlights. Originally from Bristol, Stormtrooper’s sole release was their 1980 7” ‘Pride Before A Fall’ b/w ‘Still Comin’ Home’, and having issued an excellent album of recordings from back in the day (‘Pride Before A Fall – The Lost Album’) in 2016 the band played a handful of dates to scratch the itch before calling it a day once more. However, for guitarist Bob Starling and bassist Colin ‘Boggy’ Bond there was still some unfinished business to take care of, and the result is ‘Every Now And Then’, an eclectic collection of new songs recorded and old songs re-recorded – hence the ‘then’ and ‘now’ of the title. Drummer Nick Hancox takes his place behind the kit once more, while vocals are split between original vocalist Nigel Lloyd (who left the band just before things got interesting back in the NWOBHM heyday and was replaced by Paul Merrell), Andy Milsom (frontman of Hunted, one of Starling’s post-Stormtrooper outfits) and Boggy himself. 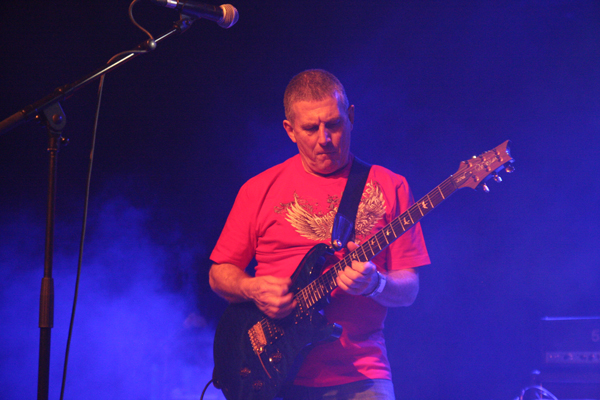 It’s probably the older songs that will hook most people in, and fans are unlikely to be disappointed with the new versions of ‘Bogg’s Song’, ‘Flight Of Fantasy’, ‘Mississippi Boogie’, ‘Joker Or The Fool’ and ‘Staff Of Life’. ‘Bogg’s Song’ was the first song Colin Bond ever wrote, and it’s grown into a groovy, funky little outing; the band make it clear that it’s been re-invented from its original “naïve, aggressive, mid-pace” earlier self (the only one of the older songs to have been revamped) but it doesn’t sound any worse for its upgrade and Starling’s understated flourishes over the fade are impeccable. ‘Staff Of Life’ is a more straight-forward cut, and although the band hate the Rush comparison this does sound a little like some of the Canadians’ less ethereal early numbers; that said, just when you think you’ve got the measure of the song Boggy takes flight and it takes quite a sweeping left turn. ‘Joker Or The Fool’ is a bouncy little outing which betrays its NWOBHM roots with a tricky drum pattern and Boggy’s Taurus pedals. ‘Flight Of Fantasy’ is a trademark Stormtrooper song, slow and atmospheric, and relatively lengthy too, coming in at just under seven minutes (this band never worried too much about keeping an eye on the clock). As such it unveils itself slowly, allowing Starling and Bond time to make their presence felt in otherworldly solo passages; things shift gear after five minutes and make for a heads-down, finger-shredding conclusion. The final golden oldie is live favourite ‘Mississippi Boogie’, a fun, straight-down-the-middle kind of number for the crowd to work up a sweat to, and makes quite a contrast to the more progressive nature of most of Stormtrooper’s material.

It’s unfortunate that these songs weren’t demoed back in the day as there’s some cracking material here and listening to it now makes you realise that Stormtrooper were an outrageously good band who had pretty much two album’s worth of material with which they could have cemented their position as NWOBHM front-runners. But if you’re then expecting another seven NWOBHM-tinged songs making up the running order here you will be very surprised. Forty years is a long time to stand still, and Starling, Bond and Hancox have, unsurprisingly, moved on to other musical pastures. As such, the newer material is much more commercial, quite poppy at times, but no less interesting as the musicians’ proficiency certainly does not play second fiddle to accessibility.

‘As It All Disappears’ is a beautifully crafted, commercial but powerful toe-tapper with some clever lyrics from Milsom. ‘The Birds’, inspired by the book and film of the same name, is perfectly paced and at just over four minutes in length could easily be a single, given its a wonderfully melodic and easily hummable chorus line. And you could be forgiven for thinking that ‘Silver Man’ wasn’t another older song, as it fits neatly into the collection and, with its retro feel and slow, hypnotic ending, comes across as almost the bridge between then and now. 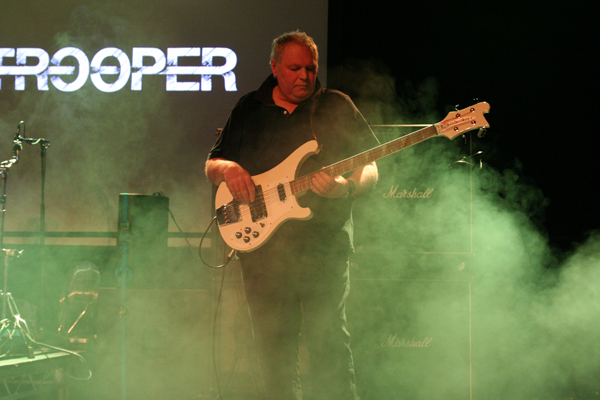 While ‘ETA’ – a love song to sat nav – is perhaps the weakest cut on offer, being a bit B-side-ish, ‘Hand Grenade’ is a show-stopper in every sense of the word: a tremendous, attention-grabbing song, ‘Hand Grenade’ is immensely accessible, and boasts an exquisite melody line, a cracking solo from Starling and a fabulous vocal from Milsom. This track is pretty much worth the price of the album alone. ‘Melodica’ bounces along at a furious pace, driven by Boggy’s bass and vocals, and the album closes with the bassist’s ‘In The End’, a charmingly delivered lament to days gone by.

It’s an added bonus that Boggy’s added a paragraph about each song as a bit of background (check out in particular ‘Staff Of Life’, a song for which they had Paul Merrell’s lyrics but until they found an old live cassette had no recollection of how the song actually went; or ‘Bogg’s Song’, a track which never had a proper title back in the day, “and after forty odd years it seemed a bit pointless giving it one now”). And the quirky old-fashioned television graphics are rather fun, too.