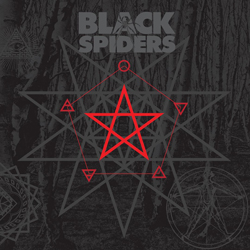 Three years after calling it a day, and with two successful albums under their bullet belts (2013’s ‘This Savage Land’ went Top 60) Sheffield’s Black Spiders took their first tentative steps to reformation in the lockdown summer of 2020. Although far from the best time to restart a band, guitarist / vocalist Pete Spiby started talking to his opposite number Ozzy Lister about kick-starting the Spiders once more and, inevitably, one thing led to another. Familiar faces returned to the fold, with guitarist Mark Thomas and bassist Adam Irwin taking their respective places once more, and as drummer Si Atkinson unable to commit, the band reached out to Wyatt Wendel, best known to many from his role as Planet Rock DJ. Despite not all sitting together in the same room at the same time, Black Spiders were back in business once more.

All of which leads to their self-titled third album. Although ‘Black Spiders’ was pulled together in the most difficult of circumstances it’s a jubilant fifty-odd minute celebration of glorious riffing and neck-breaking anthems. Black Spiders romp through the album with minimum fuss and maximum muscle. Mixing vocal harmonies with knuckle-cracking pugilism songs like ‘Give ’Em What They Want’ and ‘No Luck, No Bones’ are seemingly possessed by the spirit of aggression and attitude that once made The Almighty so fresh and exuberant, while, as befits the title, ‘Wizard Shall Not Kill Wizard’ shakes its head more to the Sabbath-esque side of things and ‘Free Ride’ is eminently hummable. Across the thirteen cuts on offer Black Spiders are revved up and ready to burn, and despite being the new kid in town Wendel certainly hasn’t been tied to the beat, cutting loose every once in a while to show exactly what he can do.

Gripes? Well, as you might expect from the band’s unpretentious, non-nonsense approach they’ve wholeheartedly embraced their influences – there’s a nice Bon Scott homage in the ‘thank yous’ at the end of ‘Back In The Convent’ – but as a result some of the songs are a bit derivative: so long as Gene Simmons doesn’t hear the opening riff to ‘Fly In Your Soup’, for example, they should be OK. And, let's be honest, in 2021 do we actually need another naughty convent girls’ song? That aside, 'Black Spiders’ is a joyous return to the limelight, and despite the class of the band’s own material it’s perhaps their cover of The Easybeats’ 1968 hit ‘Good Times’ which best sums up the album: beer in hand, smile on face, ‘rock ‘n’ roll music gonna play all night’. What’s not to like?