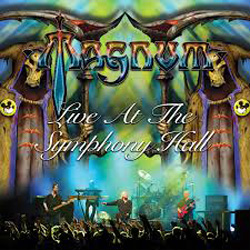 “There is only one thing in the world worse than being talked about, and that’s not being talked about,” Oscar Wilde once famously said, which is probably why in recent years Magnum releases have been popping up as regularly as politicians talking about Brexit. Keeping their name in the spotlight certainly hasn’t done Magnum any harm, seeing as last year’s ‘Lost On The Road To Eternity’ – their twentieth studio album – peaked in the UK album charts at No.15, their best showing for many a year. Capitalising on what was a well-received album and a tremendously exciting tour comes ‘Live At The Symphony Hall’, recorded on home turf at the Symphony Hall (the clue’s in the title) in Birmingham on 19 April 2018.

Unlike the band’s first live album, ‘Marauder’, recorded forty years ago this coming December and cut ‘n’ hacked ‘n’ slashed to fit on two sides of a single album and a four-track EP, ‘Live At The Symphony Hall’ runs smoothly – the whole night’s performance, in original running order – over six elegant sides of vinyl or, if you prefer, two CDs. As you might expect, highlights come thick and fast, although you’d be hard pressed to beat Tobias Sammet’s appearance, reprising his studio performance on ‘Lost On The Road To Eternity’ (guests in the form of support act Rebecca Downes and Lee Small are also on hand to help), and the rather quirky morality tale that is ‘Peaches And Cream’. Older gems like ‘How Far Jerusalem’, ‘Les Morts Dansant’ and ‘All England’s Eyes’ imbue the set with history, rather than nostalgia, as the Magnum that these days is Bob Catley, Tony Clarkin, Al Barrow, Rick Benton and Lee Morris quite happily prove that you can live in the present and still pay homage to the past. 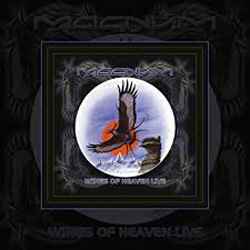 Meanwhile, SPV have also recently issued ‘Wings Of Heaven Live’ for the first time on vinyl. ‘Wings Of Heaven Live’ was recorded at various shows across the UK towards the end of 2007 and released on CD the following year to mark the twentieth anniversary of the release of ‘Wings Of Heaven’, the band’s most commercially successful album ever in their home country – breaking, as it did, into the Top 5 on its release. Once again the album unveils its gems over six luscious sides of vinyl, and after a ‘warm-up’ collection of songs (including several from the then-current album ‘Princess Alice And The Broken Arrows’) comes the entire studio album played in its original running order (picture disc bonus cut ‘C’est La Vie’ aside), finally wrapped up with a triumphant version of ‘Sacred Hour’.

Magnum have always been a great band in the studio, but these two releases are a testament to their majesty in the live arena. The band personify class as either of these albums, recorded some eleven years apart, clearly testify. “There’s only one thing better than a Magnum live album, and that’s two Magnum live albums,” as Oscar Wilde would no doubt have said, had he been a fan.