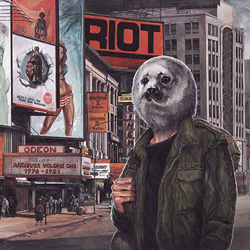 Despite being hugely American Riot were one of a very small number of bands adopted by UK fans and the New Wave Of British Heavy Metal fraternity back at the very end of the Seventies. If you were there, you might even remember the petition passed around outside gigs calling on their then record label Capitol to release them from their contractual chains.

‘Archives Volume One: 1976 – 1981’ (there are two more volumes, each moving the timeframe further forward) presents eighteen unreleased demos and alternate takes of songs which made the running order of their first three – and, some might argue, best – albums. The line-up changes as the band evolves, but the core of guitarist Mark Reale and vocalist Guy Speranza (both of whom are unfortunately no longer with us) remains constant, and the final few cuts feature the best-known line-up of the time with Reale and Speranza joined by guitarist Rick Ventura, bassist Kip Lemming and drummer Sandy Slavin.

A handful of the songs – ‘49er’ and ‘White Rock’, for example – will be familiar to the most casual of fans, but the lesser-known proto-Riot material like the mid-paced ‘I’m A Marshall’ and the chugging ‘Lovin’ Comes Easy’ have a certain sparkle and charm, even if they don’t come from the band’s top drawer and were discarded early on. Two versions of the solid gold early live favourite ‘Back On the Non-Stop’ (with a fun-filled riff not dissimilar to Fist’s ‘S.S. Giro) make you wonder why the track never made the cut, and it’s odd to hear ‘Narita’ play out without the Japanese voice-over. The highlight of this cracking collection though has got to be the unreconstructed version of ‘Waiting For The Taking’ which, at seven-and-a-quarter minutes dwarfs the final version on ‘Narita’, the extended running time accounted for as (presumably) Reale unashamedly and blissfully solos away until they probably ran out of tape.

The package is wrapped up with a DVD shot at My Fathers Place in Roslyn, New Jersey in 1981 with the by-now settled Speranza / Reale / Ventura / Lemming / Slavin line-up. Yes, there are drop-outs and a bit of tape stretch, but it’s fabulous to watch vintage footage of Riot as most of us knew and loved them going through their paces on a small club stage with a set list to die for. Absolutely fabulous...