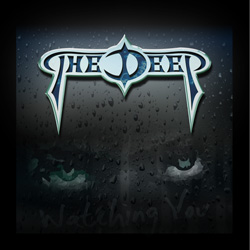 THE DEEP – Watching You (Independent)

“Immediately after releasing our debut album ‘Premonition’,” recalls vocalist Tony Coldham, “work started on the second album. Once again it was going to be a mix of fairly heavy tracks with some commercial stuff, somewhat like ‘Premonition’, but with a more modern sound, reflecting our writing style now. However, a few of the songs seemed to tie together really nicely into a particular theme. For a while we considered a fifty/fifty split for the album but, as we kept writing, we came up with more songs following that theme. As such, we decided to put those songs that didn’t really fit with this concept on an EP. Later, when we heard the live tracks, we thought we could add them to the EP as a bonus.”

Such is the backstory to ‘Watching You’. Trailered as an EP but boasting a generous eight songs and clocking in at forty-one minutes The Deep’s latest release is not only an exciting addition to their canon but is also a strong contender for metal assault of the year. By hiving off this new material and releasing it separately Tony and his bandmates Paul Smith and Mick Feleppa (guitars), Phil Reeve (bass) and Alan Mogg (drums) have put together a clutch of robust, memorable and truly electrifying songs. Tony reckons they are more commercial than the band’s usual output, but in fact they’re just more accessible and extremely catchy, written with an eye on the finish line and an ear for strong melody. ‘Prepare To Rock’ – a tribute to those murdered at The Bataclan – is perhaps the best of the bunch, a true exhibitionist with pace, flair and a cracking solo, but that’s not to dismiss the others. ‘Dead Man Walking’ keeps the tempo but lyrically examines how you can take control of your own life, while ‘Watching You’’s acoustic intro suckerpunch gives way to a low-key chorus reflecting the paranoia of the lyrics. Rounding off this fresh quartet, ‘Taking Over’ gears things up once more and offers up what Tony calls “a tongue-in-cheek look at the madness of world politics” set to a pounding backbeat and a chorus line which calls to mind Judas Priest’s ‘The Sentinel’; if this one doesn’t get your feet keeping time you’d better check you’ve still got a pulse.

And that’s just the first half of this coat of many colours. The second half of ‘Watching You’ serves up four songs from ‘Premonition’, recorded live at the British Steel festival in Fisme, France, in October 2016, and as you’d expect from a band of this calibre, in a live setting the songs really come to life. If you’ve got The Deep’s debut you’ll know just how good ‘The Rider’, ‘All I Want’ ‘Night-Stalker’ and the title track are, and it’s ‘Premonition’ itself which kicks off this short but bracing snapshot of the band’s set with its dual guitar runs and Maidenesque intent. Just listening to this now makes you think what a show it must have been on the day.

While staying true to their roots but coming at things from a contemporary point of view The Deep continue to prove that they have a lot to offer metal in the twenty-first century. Who needs to teach old dogs new tricks when they’re more than able to show the young pups a thing or two?

There’s still time to scribble ‘Watching You’ on your letter to Santa; it’s due out this month, and will undoubtedly be the last great release of 2018. And then be heartened by the fact that, according to the effusive vocalist, “right after the release of the EP we’ll be getting back to the songs on the next album. We hope to have it finished probably late summer. It’s going to blow people away!”