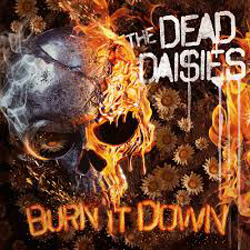 THE DEAD DAISIES – Burn It Down (SPV)

Some believe there’s a parallel universe in which the Nineties and Noughties didn’t exist and what happened in the Eighties belongs in the Tweenies. The evidence is clear to see in The Dead Daisies, the pick of the bunch. John Corabi, David Lowy, Doug Aldrich, Marco Mendoza, Deen Castronovo – as the band is now: the line-up tends to be rather fluid – are gloriously retro, rebellious and rowdy, and shamelessly continue to dig nuggets out from a mine that many thought had dried up years ago. And the good news is that their fourth studio album ‘Burn It Down’ – their first since last year’s storming ‘Live And Louder’ onstage set rattled windows nationwide – continues in that vein.

Playing metal straight, with nary a time change in sight, The Dead Daisies make the albums that Aerosmith gave up writing years ago. The excellent opener ‘Resurrected’ and ‘Bitch’ in particular could easily have come off ‘Draw The Line’, and across the board other Bostonisms lie just beneath the surface – and that’s not to draw cries of plagiarism, just an indication of how these boys really know how to cook. The songs are beautifully crafted and flow in a way to maximise attention, and the playing (as you might expect) is flawless: but despite the fact that there’s no lack of talent across the ranks, top honours for me go to John Corabi, a man who always comes across like he was born to strut his stuff onstage and whose introduction to the ranks upped the ante considerably. And for those who dismiss The Dead Daisies as all hos and hullabaloo, they’re a band who aren’t afraid to shake things up a bit. The first single from the album ‘Rise Up’ is a call to arms, and it’s fitting that the CD bonus track is a romp through John Lennon’s ‘Revolution’, a song whose message is as apposite now as it was when it was written fifty years ago.

I’m sure that one day the wheels of metal will roll around once more and people will decry The Dead Daisies as no longer being ‘relevant’; and you know what? They won’t give a toss. They’ll just keep doing what they do. Long may it last!